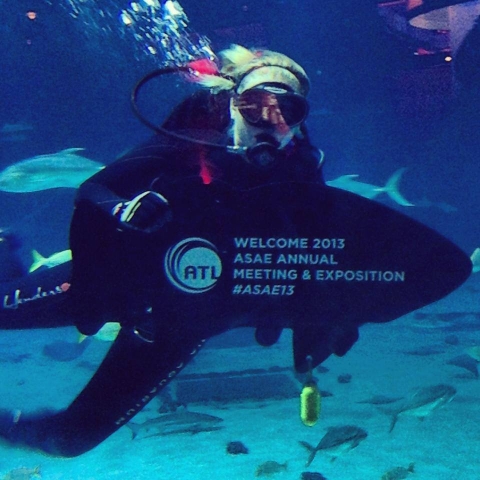 Atlanta pulled out all the stops to show off the city to more than 5,000 association executives, suppliers, spouses and guests at the 2013 American Society of Association Executives’ Annual Meeting & Exposition Aug. 4-6.

The number of association executives grew this year, with nearly 3,000 attending, the second highest amount since 3,124 attended in 2008 in San Diego.

John Graham, president and CEO of ASAE, said cities often make a lot of promises when they bid on the meeting.

“Atlanta lived up to and exceeded the promises and commitments (they) made,” he added.

William Pate, president and CEO of the Atlanta Convention & Visitors Bureau, said, “Hospitality is really the gasoline that runs the economic engine of the city.”

He added that it not only adds $12 billion of economic impact, but also more than 220,000 jobs. “To be able to have decision-makers in the city to see what we have to offer is really important,” Pate said.

This year, attendance may have been slightly lower than last year's event in Dallas that drew 5,456 attendees, but it still beat the number of association executive attendees in 2012, which was 2,773. Graham said the numbers that were down this year were in the spouse and guest category.

The event kicked off with an opening celebration at the Georgia Aquarium, World of Coca-Cola and a concert in between those two venues featuring 80’s girl band the Go-Go’s.

The next morning, the mayor of Atlanta, Kasim Reed, told the audience how important their presence was in the city. “Associations are vital to the meetings and conventions in Atlanta,” he added.

In fact, Reed said, 75 percent of all their meeting and convention business came from associations.

Following Reed, opening general session keynote, Susan Cain, took the stage. Cain authored “Quiet: The Power of Introverts in a World That Can’t Stop Talking” and said, among other things, that there was “zero correlation” between the best talkers having the best ideas.

She pointed to several examples of well-known introverts, such as Google’s Larry Page and Mahatma Gandhi, as being strong leaders, despite the fact they tended to be quiet people.

Cain challenged the audience to engage introverts in their organizations more. “Half of the population are introverts,” she added. “We’re failing to make the most of those people’s hearts and minds.”

With more than 120 learning sessions, such as half hour “Snap Learning Spot segments,  as well as the networking opportunities, including the opening and closing night celebrations, Engagement Lounge and ASAE Foundation’s The Classic, the event received praise from association executive attendees.

“”This is always a fantastic event,” said Brian Lepacek, executive director of LCMH Foundation, a health care organization based in Evergreen Park, Ill.

He added, “This is my sixth conference. Unlike other professional organizations, ASAE offers all executive-level courses.”

Tara Withington, executive director for association management company Executive Director Inc., which is based in Milwaukee, Wis., said she liked the general and innovation sessions. “One of my biggest takeaways is we need to be thinking for the future and being proactive, instead of reactive,” she added.

“The partnership really helped out visibility,” he added. “We have had very good traffic in our booth.”

Overall, the show has a tremendous impact on cities in which it is held, Graham said. Last year’s show in Dallas already has resulted in more than $100 million in future bookings. On average, at least 20 percent of the organizations with attendees at the ASAE Annual Meeting end up booking in the ASAE Annual meeting’s host cities. “It does pay off,” Graham said.

Next year, Nashville, Tenn., will have the opportunity to show off not only its new convention center, but also its new Omni-branded hotel when the ASAE Annual Meeting & Exposition is held Aug. 9-12