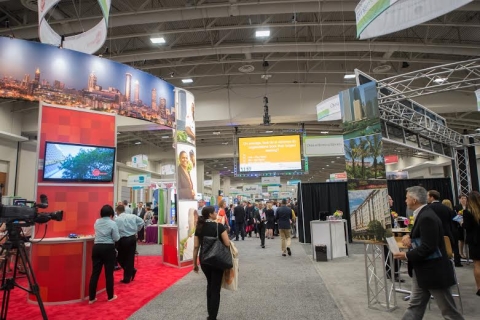 Springtime is the largest one-day trade show in the meetings and events industry.

“Traffic was excellent and exceeded our expectations,” according to the Rose Bowl’s Jens Weiden, who participated with the Pasadena Convention & Visitors Bureau.  “When I was walking around the showfloor, booths were consistently engaged with visitors and talking shop.”

In addition to the attendees, there were 368 exhibiting companies occupying approximately 48,000 square feet of floor space.

“We had good attendance all day during the show and several new leads,” said Art Shaw, regional director of sales for the Fort Worth Convention & Visitors Bureau.

He added, “ASAE made some modifications to the schedule and floor layout, which has made it easier to get around.”

ASAE launched a service, in partnership with eShow, called “Map Your Day,” where registered attendees could go online to search for exhibiting companies they wanted to visit.

After choosing exhibitors to visit, the attendee was given a listing in booth number order and a personalized map of the showfloor with the booths they chose highlighted.

She added, “Over 360 of the exhibiting companies had at least one bookmark.  In addition, the contact information for each bookmark is given to the exhibitor, so they now have a lead, even if the attendee doesn’t stop by the booth during the show.”

Another new feature this year was the addition of a day and a half pre-conference program - Meetings & Events Technology Bootcamp, which had more than 60 professionals enrolled.

“More meeting professionals are becoming responsible for coming up with strategies for social media, mobile and digital technologies for their events,” Ledoux said.

She added, “Implementing these new technologies are transforming our industry.  They can become game changers at a very low expense to an event organizer.  Knowing about the options available allows you to create a better experience for your members and attendees.

The trade show itself has had changes too - opening and closing hours were pushed up an hour earlier this year. “Opening early was a good thing,” Ledoux said. “We still had good number attendees on the show floor during the last hour.”

As a result of the changes to the showfloor hours, ASAE’s general session started after the expo floor had closed.

In his opening remarks, ASAE President and CEO John Graham said that “outside of the federal government, the meetings industry is the No. 1 provider of jobs in the Washington, D.C, area.

Next year’s Springtime Expo will be held April 9.