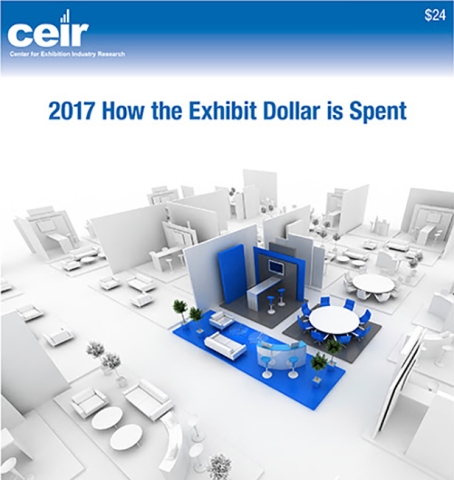 The Center for Exhibition Industry Research (CEIR) has released an updated version of its popular report, How the Exhibit Dollar is Spent.

Originally published in 2014, the 2017 report relays how exhibiting expenditures break down and identifies where spending has remained constant – versus increasing – compared to 2016 levels.

“CEIR is pleased to update these metrics,” said Cathy Breden, CEO of CIER. “Exhibitors, organizers and suppliers alike will benefit from understanding where exhibitors spend their marketing dollars on trade shows.”

She continued, “It is a resource that helps exhibitors benchmark their spending allocations to industry norms and helps organizers and suppliers understand how much of exhibitor spending they are capturing.”

The report estimates that in 2017, exhibitor direct spending rose to $25.3 billion in nominal dollars, while the outlook for 2018 exhibitor property plans is also disclosed, reporting the percentage of exhibitors planning to use their exhibits as is; invest in refurbishments or new exhibit purchases, or contract to rent exhibits.

The results point to a healthy market for refurbishing services and that a notable percentage of exhibitors are planning to make new exhibit purchases.

Expenditure categories in this report include:

Along with total results, the report provides differences in spending allocation by annual revenues, annual marketing budgets and by specific CEIR sectors.

The online survey results depicted in the report are based on a study conducted by CEIR last summer that polled a sampling of exhibitors from lists provided by Fern, Freeman, GES, Hargrove and Shepard Exposition Services. A total of 424 exhibitors responded to the survey.

Download your copy of 2017 How the Exhibit Dollar is Spent HERE.