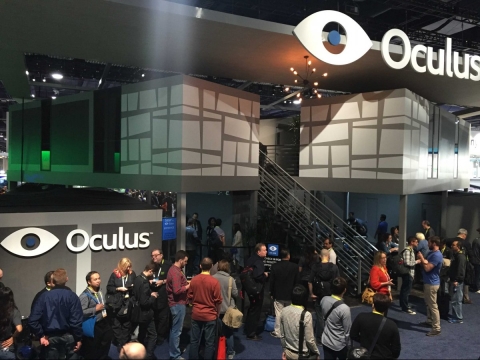 The popularity of virtual reality is evident with the huge jump in growth of that section of the showfloor for CES 2016.

Owned and produced by the Consumer Electronics Association and on tap Jan. 6-9 at the Las Vegas Convention Center, the Gaming & Virtual Reality Marketplace footprint will jump 77 percent and feature 40 booths.

Exhibitors will showcase the next wave of immersive multimedia for virtual reality systems and environments and today's latest gaming hardware, software and accessories designed for mobile, PC's and consoles. Key exhibitors within this space include Oculus VR, Virtuix, Sphero and more.

"Developments in virtual and augmented reality have made significant strides to allow us to engage in a 360-degree gaming experience, explore the inside of foreign landmarks, treat phobias, better train medical professionals, virtually attend an event and much more," said Karen Chupka, senior vice president of corporate business strategy and CES, CEA.

She added, "The Gaming & Virtual Reality Marketplace at CES 2016 will showcase all of these immersive innovations that are advancing this futuristic industry."

According to CEA research, virtual reality headsets are expected to really take off in 2016 with projected sales to increase by 500 percent, compared with 2015, to reach 1.2 million units sold.

New for 2016, CES will launch the Augmented Reality Marketplace across a minimum of 3,000 net square feet of exhibit space to showcase new, disruptive technologies that can change how we learn and experience the world.

Exhibitors such as ASRC Federal for NASA, Marxent and Occipital  among others will feature the latest in augmented reality technology including headsets, structure sensors, software and more.

Both the Gaming & Virtual Reality and Augmented Reality Marketplaces will be located at CES Tech East, in South Hall 2 of the Las Vegas Convention Center.

Startup Exhibits Grow by 50 Percent at the 2015 International CES
Home to the latest technology ideas and innovations, the Eureka Park Marketplace at the 2015 International CES will expand by more than 50 percent, compared with…
Should You Use Virtual Reality at Your Event?
Virtual reality is a really hot topic right now in the events and social marketing industries. Though it certainly isn’t the first time VR burst onto the scene (remember the…
Virtual Reality in Event Planning – A Competitive Advantage for Venues
We work with a host of clients, helping them bring sometimes massive spaces at a single location or distributed over the globe into the digital world. The technology enables…
Meet AC Expands Its Virtual Reality Experience Platform
In January of this year, Meet AC unveiled a new virtual reality (VR) experience that enables event planners, brands and prospective visitors to experience everything Atlantic…
Las Vegas Convention and Visitors Authority Unveils Virtual Reality Experience
The Las Vegas Convention and Visitors Authority (LVCVA) launched a Virtual Reality Companion app that helps transport trade show delegates and would-be visitors alike to…
Virtual Reality Developers Conference Set to Launch in Shanghai in November
The Virtual Reality Developers Conference (VRDC), an event for creators of immersive VR, AR, and MR experiences, has unveiled dates and location for an expanded edition, VRDC…