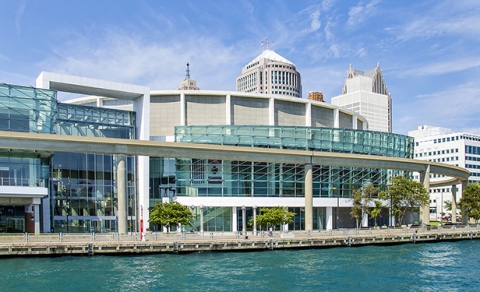 According to Claude Molinari, general manager of the downtown Detroit facility, the DRCFA’s selection of Chemical Bank represents strong financial future and a big move toward Cobo becoming a self-sustaining facility by 2024.

“This unprecedented naming rights agreement is a great win for all parties,” Molinari said. “Chemical Bank makes a strong statement of commitment to the region and secured naming rights to a convention center that is growing in notoriety every day.”

By the end of this year, the bank and the DRCFA will announce Cobo’s new name, which will remain as-is until that time, he added. 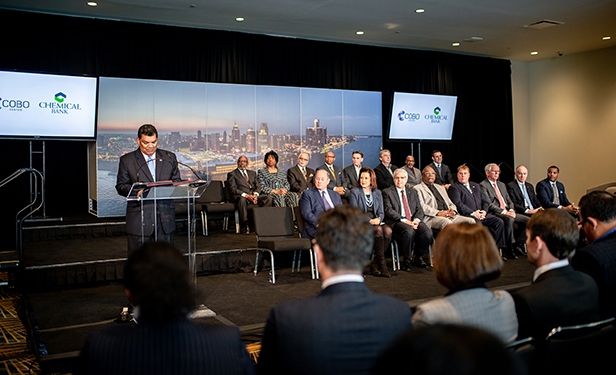 Securing a naming rights initiative for the convention center has been a longtime goal of the DRCFA, according to Larry Alexander, DRCFA chairman and president and CEO of the Detroit Metro Convention & Visitors Bureau.

“Our announcement today gives us all an important message: that public-private partnerships work, and that we continue to dedicate ourselves to serving the customers of this great Center and to the rebuilding of a truly great American city,” Alexander said. “There could not be a better partner than Chemical Bank.”

While most convention centers throughout the U.S. typically are named after local public officials, Cobo isn’t the only U.S. convention facility that has recently granted naming rights to a financial institution in exchange for sponsorship funds.

According to local news reports, Huntington Bancshares Inc. announced the agreement between FirstMerit Corp. and Cuyahoga County as a merger between Huntington Bank and FirstMerit drew closer to completion. Huntington took on all terms of the original 20-year, $10.3 million deal approved between the county council and FirstMerit in the fall of 2015.

“This is part of the implementation of the group plan and will allow us to do some investments in the malls that really make this convention center not only continue to be state-of-the-art but really provide the kind of amenities…that will make this a prime place where people will be able to walk and play and things you need to do in a downtown area,” said Cleveland Mayor Frank Jackson during a September 2015 news conference when the naming rights deal with FirstMerit was announced.

Paid for with county sales taxes, the $425 million HCCC and the Global Center for Health Innovation opened in June 2013.

Thanks to the Chemical Bank deal, Michigan taxpayers will receive significant benefit in sponsorship revenue to offset the cost of operating the convention center, Molinari said.

Mich. Gov. Gretchen Whitmer said she believes this new collaboration and long-term commitment to the city of Detroit and greater region will make a real, meaningful difference for Michiganders.

“I’m eager to partner with the business community to make sure we bring more investment to our state, boost local economies in cities like Detroit, and connect more Michiganders to good-paying jobs,” Whitmer said.