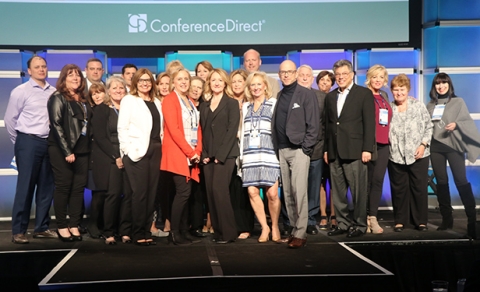 Last month, full-service global meetings solution company, ConferenceDirect, provided 23 of its associates with the opportunity to learn how to identify and help stop a growing problem in the hospitality industry: human trafficking.

At the company’s Annual Partner Meeting on March 28 at the Loews Hollywood Hotel, the ConferenceDirect employees completed a Human Trafficking Awareness course presented by the Los Angeles Coalition to Abolish Slavery and Trafficking (CAST), which works to identify human trafficking cases in the Los Angeles region and offers a variety of local public speaking engagements including specialized training in identifying trafficking victims.

Led by Becca Channell, CAST task force coordinator, the certification course provided a practical introduction to the issue; shared real case studies in the hospitality industry to help associates understand the scenarios they might come across in their day-to-day work, and provided tools and resources to identify and respond effectively to a suspected human trafficking case.

“ConferenceDirect understands this is a growing issue and being in the hospitality industry, many of our Associates travel often and could potentially witness cases,” explained Larry Hanson, ConferenceDirect CMO.

He continued, “Now they will be able to be more alert to these situations and know how to handle them with the tools they learned: how to identify a suspected case and what to do when you witness something.”

According to the International Labour Organization and CAST, human trafficking is the fastest growing criminal enterprise of the 21st century, with California, Florida and New York particularly vulnerable to this problem due to factors such as proximity to international borders, numerous ports and airports, significant immigrant populations and large economies that include industries that attract forced labor.

Although most of the CAST course participants were shocked by how often human trafficking happens in Los Angeles communities, they felt empowered upon completion of the course as well as pleased to have the tools to be more alert in their day-to-day activities, according to ConferenceDirect officials.

“We were honored to have (CAST CEO Kay Buck) and Becca join us at our Annual Partner Meeting to discuss the importance of human trafficking and lead a course with some of our Associates to help us become more aware of this growing issue,” Hanson said.

PCMA Makes Commitment to Help Eradicate Human Trafficking
As part of its new vision that business events can be the drivers of social positive change, PCMA has committed to combat child exploitation by signing The Code of Conduct…
MGM Resorts Makes Generous Contribution to Fight Human Trafficking
As part of its contribution to the campaign to fight the global crime of human trafficking, MGM Resorts International recently awarded $250,000 to the McCain Institute for…
Caesars Entertainment and ImpactLV Launch Fund to Support Victims of Human Trafficking
In an effort to help Southern Nevada’s vulnerable populations, Caesars Entertainment has launched The Shared Future Fund, a first-of-its-kind investment model that will be…
Want to Combat Human Trafficking? Get Involved with 20BY20!
To help draw attention to the serious issue of human trafficking, ECPAT-USA, part of ECPAT International — a global network working to eradicate sexual exploitation of…
FCC Tells Commercial Establishments to Stop Blocking Wi-Fi
After a complaint was filed against Marriott International last year for illegally blocking personal users’ Wi-Fi signals at its Gaylord Opryland Hotel and Convention Center…
Stop Using Printed Material and Move to the Digital World
Yes, I am throwing down the gauntlet!  Ditch your paper event guide, maps, and programs.  You are wasting your money, your sponsors’ money, and the time it takes to…