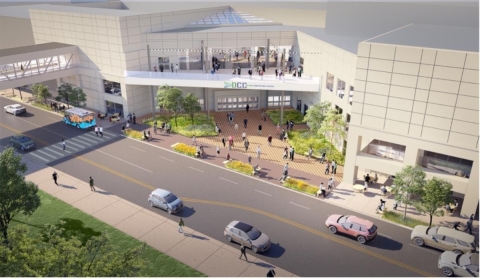 The Dayton Convention Center (DCC) in Dayton, Ohio has begun a $40 million renovation project designed to serve as an integral part of the city’s downtown economic revitalization. According to officials from ASM Global, which manages the convention center, the 51-year-old facility will soon undergo a major update that will equip it to meet the ever-evolving needs of meeting and event clients.

Construction is expected to conclude in late summer or early fall of 2024, and the venue will remain open to host events throughout the project.

Announced on Sept. 22, the project follows the DCC’s April 2021 sale to the newly formed Montgomery County Convention Facilities Authority (MCCFA), an independent governing body tasked with overseeing funding improvements and services for the convention facility that will allow the Dayton Convention & Visitors Bureau to attract more national and regional events that will drive revenue and economic growth to Montgomery County and the city of Dayton.

According to DCC officials, not only will a revamped and refreshed DCC serve as a main driver for the city’s downtown renaissance, it will also help bring online a beneficial array of mixed-use facilities, residential inventory, restaurants and entertainment offerings for visitors and residents alike.

“With the additional hotel inventory coming online in 2022 and 2023, the renovation of the Dayton Convention Center will solidify Dayton’s place on the map for meeting and event planners in the region,” said Jacquelyn Powell, president and CEO of the Dayton Convention & Visitors Bureau. “The sleek and modern design is a long-awaited and welcome addition to our impressive list of meeting and event facilities in Montgomery County.”

Additionally, Dayton’s inventory of 981 downtown area hotel rooms is expected to be supplemented by additional accommodations in the near future. New hotels in the pipeline include:

“It’s an exciting time to be in Dayton,” said DCC General Manager Kelli Donahoe, who was brought on board in April 2021 when the MCCFA tapped ASM Global to oversee the day-to-day operations of the venue. “We are on the cusp of a monumental movement here in downtown, and the DCC is an integral part of this economic revitalization.”

The facility offers a convenient overnight package with the 287-room Radisson Hotel Dayton Convention Center, which is connected to the facility via a pedestrian walkway and offers ample connected parking.