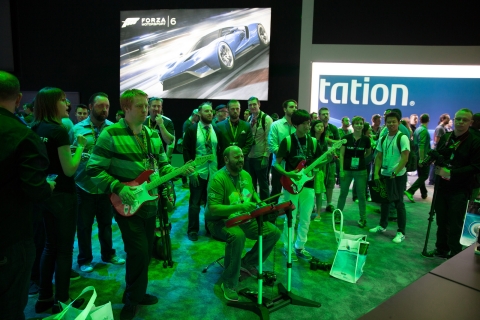 Video gamers likely are rejoicing today, with the Entertainment Software Association, producers of the annual E3 Expo for the video gaming industry, unveiling a new event – E3 Live - that will be open to the public.

On tap June 14-16 at L.A. Live, the same time as E3 Expo next door at the Los Angeles Convention Center, video gamers will have the opportunity to enjoy video games, music, competitions and video game swag from some of the biggest names in the industry.

"The biggest event in video games is bringing gamers to the next level. We are excited to introduce E3 Live, an exciting, high-energy video game event that brings some of the best in video games directly to fans," said Michael D. Gallagher, president and CEO of ESA.

He added, "E3 Live will give gamers the chance to test-drive exciting new games, interact with some of their favorite developers, and be among the first in the world to enjoy groundbreaking game experiences. For fans of video games, this will be an event like no other."

"After 20 years of making kick-ass gaming tech, one thing we've learned is that it's all about having fun," said Frank Azor, general manager, Alienware. "This inaugural E3 Live event should be a blast and we're excited to send our decked out Alienware truck with our latest and greatest gear to add to what is sure to be a fun event for us all!"

Tickets are limited and a sold-out crowd is expected. From the looks of it on the new event’s Twitter feed, the free tickets to try out the games were going quickly.

Here are some of the participating companies:

He added, "Since the heart of Twitch has always been our platform's accessibility to all members of the gaming community, we love that everyone will now have the opportunity to check out the latest games and connect with each other at E3 Live."

UBM to Launch Meat Event Alongside Livestock Asia
UBM Malaysia, a subsidiary of UBM Asia, in conjunction with the World Veterinary Poultry Association (WVPA) and World Poultry Science Association (WPSA) Malaysia branch, will…
ESCA Launches ALL IN Event Readiness Campaign Alongside New Industry Recovery Efforts
The Exhibition Services & Contractors Association has launched a new campaign to demonstrate how its members are preparing to relaunch trade shows, meetings and events…
International Association of Exhibitions & Events Names Los Angeles Abilities Expo 2015 Top Public Event
The International Association of Exhibitions & Events has named Los Angeles Abilities Expo 2015 the Top Public Event this year, an award that will be celebrated at the…
New Association for Women in Events Launches
A new association for women who are in the events industry, aptly called the Association of Women in Events, recently launched to connect and empower women in the meetings…
E.J. Krause & Associates Launches Electric Bike Events
E.J. Krause & Associates (EJK) is expanding its 2018 event portfolio with the debut of its Electric Bike Events series, created to cover the recreational electric bicycle…
JD Events Launches Plant Based World Conference & Expo
JD Events will be launching Plant Based World Conference & Expo, set to take place June 7-8, 2019 at the Jacob K. Javits Convention Center in New York City. PBW intends…