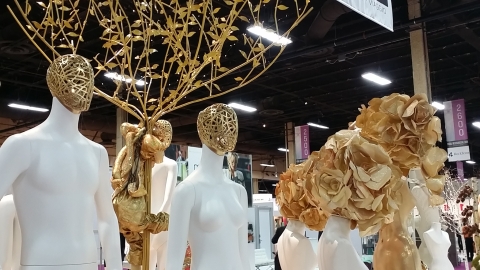 Bridging the gap between online and brick-and-mortal retail was the theme of GlobalShop 2015, the annual store design and retail marketing event that took place March 24-26 at Mandalay Bay Convention Center in Las Vegas.

As retailers look for ways to tap into the new consumer shopping preferences, the show is seeing strong growth. Pre-registration was up 25 percent, compared with 2014, which had come in at about 12,000 attendees. The show featured 760 exhibitors, including 200 new, and took up more than 215,000 square feet.

“This is the biggest spike across all metrics in 15 years,” said Doug Hope, the show director and founder. “It’s a very attractive market for exhibitors, and it’s trending up.”

Back after a four-year hiatus, Hope is excited about the show’s prospects after the acquisition by Onex in 2013. The private equity firm also bought brands in the healthcare and senior living design market, as well as HD Expo, Kitchen and Bath Industry Show and (last month) the International Pizza Expo.

“We talked about our vision for GlobalShop with the company, and ran to the races,” Hope said about working with the new parent company. “We’ve got a 3-year plan, and everything’s running according to plan.”

A synergy already in the works is the upcoming collaboration with the Internet Retailer Conference + Exhibition, also  an Emerald Expositions show.

In 2016, the shows will produce a Centerpiece exhibit that will be used with modifications for both events and will highlight the seamless integration of online into stores. Dubbed “Bricks & Clicks,” it will bring together digital and physical retail spaces in a fully integrated retail environment.

“The majority of consumers expect retailers to offer a digital experience in-store, but the majority of retailers do not yet offer it,” Hope said, noting the giant opportunity for potential. “Retail is on track to be the fastest adopting bricks-and-mortar business entering the physical/digital mash-up arena.”

This year, the Path to Purchase Centerpiece already started to help retailers get on the same page with shoppers, whether they want to do research online and pick up at the store, do “showrooming” or get recommendations on flattering looks like items already in the fitting room.

“There’s a lot of market uncertainty and we wanted to bring definition to it,” Hope said. “Our retailers go to tech shows and discover that the technology they’d like to see in their stores is in Kickstarter mode. Here we wanted to showcase scalable solutions that can be put in stores tomorrow.”

Attendees thought that was a great idea. Coming from Istanbul, Raffi Kayaer with Armer Turizm said, “Innovations are progressing much faster in North America than in Europe.” He also gave a nod to functional, business-oriented design and printing solutions also would work well in Turkey.

“We’re definitely planning on coming back,” he added.

Trade Show Industry Sees Q1 1.6 Percent Growth Uptick
The trade show industry was back on the positive side after slipping in the final quarter of 2016, with a year-over-year 1.6-percent uptick in growth to kick off the first…
Huge Growth Seen at This Year’s Natural Products Expo West
Natural Products Expo West 2015 saw its best year for show attendance when it recently was held at the Anaheim Convention Center, even after a vigorous re-qualification of…
Trade Show Industry Snags Highest Quarterly Growth in Eight Years
After a big increase in the first quarter of this year, the performance of the business-to-business trade show industry, as measured by the Center for Exhibition Industry…
Trade Show Industry Sees 1.8-percent Growth Uptick in Third Quarter
After last quarter, which saw slowing growth in the trade show industry, the third quarter bounced back with the 17th consecutive positive quarter showing, a 1.8-percent year…
Trade Show Industry Sees 3.1-percent Q3 Uptick, 21st Straight Quarter of Growth
The trade show industry continued its growth streak into the third quarter of this year, with a 3.1-percent uptick, compared with the same quarter last year, marking the 21st…
2015 Music China Will Be the Biggest Yet
This year’s Music China, taking place Oct. 14-17 at the Shanghai New International Expo Centre in Shanghai, will be the biggest ever with 105,000 square meters of…