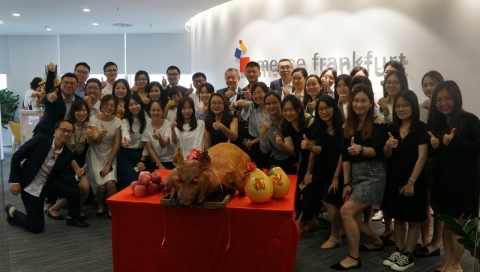 From six members of staff in 2005, Guangzhou Guangya Messe Frankfurt now has over 40 employees. Ambitious plans for growth in the Greater Bay Area and beyond have been a key driver behind the move to new office space, which can accommodate up to 60 people.

The company was established in 2005 after a joint venture was formed combining the forces of Messe Frankfurt and Guangzhou Guangya Exhibition Company. The union followed a fruitful collaboration between the two companies in 2004, when they successfully co-organised Electrical Building Technology China, and Guangzhou International Lighting Exhibition – now the largest fair of its kind in Asia.

With combined resources, the joint venture has moved from strength to strength over the past 14 years, adding a number of industry leading events to its portfolio.

Expanding its footprint into mold and die technologies, the company launched Asiamold in 2007 before acquiring the industrial automation focused ‘SIAF Guangzhou’ in 2010. Leveraging the expertise of Guangzhou Guanya Messe Frakfurt and capitalising on South China’s position as a global hub for high-tech manufacturing, both fairs have grown significantly to become prime sourcing platforms in the Greater Bay Area.

Keeping sector players up to date with the latest technologies, the two fairs are now held concurrently, while the addition of a ‘3D Printing Asia Zone’ (held in conjunction with Asiamold) in 2013 allows professionals to find greater sourcing opportunities within the industrial automation sector.

Having extended its presence into different industry sectors, Guangzhou Guangya Messe Frankfurt focused on broadening its geographical reach. Utilising resources from its flagship building technology fairs, the company launched Shanghai Intelligent Building Technology in 2012, followed by Shanghai International Lighting Fair in 2014. At the same time, the company bolstered its portfolio of electronics and automation trade fairs with the addition of PCIM Asia – Shanghai’s business hub for power electronics solutions.

In the same year, the adoption of Wire and Cable Guangzhou helped to cement the company’s leadership position as a provider of trade fairs for manufacturing technologies and components.

Following a successful entry into the East China market, the company looked to the future, as new technologies emerged in different industry sectors. Shanghai Smart Home Technologies was launched in 2015 to accommodate the market for smart devices, communication and IoT technology; while a year later in 2016, Parking China was launched in Shanghai as a dedicated exhibition for intelligent parking solutions.

Throughout its expansion, the company has retained its core presence in the Greater Bay Area. In 2018, the company made a foray into South China’s safety, security and fire sectors with involvement in Guangzhou Public Security Technology, a business destination for smart security solutions.

Amidst the Chinese Government’s plans to make the Greater Bay Area an even more significant business hub, Guangzhou Guangya Messe Frankfurt aims to capatilise on new opportunities in cities such as Shenzhen. In 2020, the inaugural Formnext + PM South China will take place at the new Shenzhen World Exhibition and Convention Center, delivering a business exchange platform for manufacturing materials, design, software and processing technologies.

Messe Frankfurt Shanghai Relocates to New Office
For the past 15 years, Messe Frankfurt has established a strong foothold in the thriving Chinese market and now is widely represented in a number of subsidiaries and joint…
Messe Frankfurt’s Intertextile Shanghai Opens at NECC
A few weeks ago, Messe Frankfurt opened the relocated Intertextile Shanghai Apparel Fabrics – Spring Edition for the first time at the National Exhibition and Convention…
Messe Frankfurt Forms New Subsidiary in China
With the establishment of Guangzhou Li Tong Messe Frankfurt Co Ltd., Messe Frankfurt has further increased its presence in China. The new subsidiary is a joint venture…
Questex and Messe Frankfurt to Launch New Shows in 2020-21
Two new shows representing two very popular and expanding industry sectors will debut in the next two years.  Questex is gearing up to launch Impact CBD, a content-based…
SIAF Guangzhou Commemorates Its 10th Edition with Huge Increase in Visitors
SIAF concluded its 10th edition March 12 to overwhelmingly positive approval. The show was once again held concurrently with Asiamold – Guangzhou International Mould &…
DMC Company Pacific World Opens New Office in Myanmar
Pacific World will open an office in Myanmar, expanding the integrated global DMC and Event Management organization’s reach to 36 countries across the globe.   “…