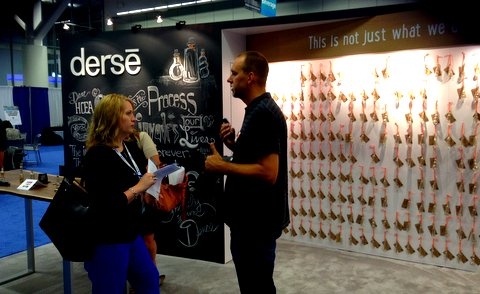 If the standing-room only crowd in the “Healthcare Industry Trends Changing the Events Experience” session during the Healthcare Convention & Exhibitors Association’s 2014 Annual Meeting was any indication, it was obvious that top of mind for a lot of suppliers, health care corporate exhibitors and medical associations was the topsy-turvy times in their industry.

Chris Metzger, Freeman’s vice president of corporate accounts, led the session on the first full day of the meeting at the Cleveland Convention Center.

“Medical and healthcare events have had a harder road to climb after the great recession,” Metzger said.

From 2003-2008 were boon years in the industry, with a lot of blockbuster drugs hitting the marketplace. But, besides the decline of that market and the overall recession in general, the industry also has had other headwinds, including several new healthcare laws and a lot of mergers in the industry.

Randy Bauler, corporate relations and exhibits director for the American Association of Critical-care Nurses, who was in the audience at the session, said his biggest concern was “dealing with the unknown every day.”

Others agreed, pointing out how the Sunshine Act, which placed strict regulations on “gifts and payments” to healthcare providers, among other things, had now started expanding from the federal to state level.

Metzger encouraged people to focus on the human element of their events by creating memorable experiences that touch their attendees emotionally, make networking fun and easy and to utilize technology to make the experience more customized and personable.

Even with the challenges in the industry, Mike Pennington, HCEA’s executive vice president, said the total attendance of all the medical shows on the top 50 list recently released by the organization had increased, compared with last year.

“It’s been steadily climbing,” he added.

At the HCEA annual meeting, attendance dipped some from the previous year to 430 attendees, but Pennington said one of the main reasons was there had been a lot of industry consolidation.

“(Attendance) was a little lighter than we have seen in the past, but not unexpected,” he added. “When two members merge, we lose a member.”

Education is a major focus at the annual meeting, with three days of sessions ranging from “Turning Your Clients Into Raving Fans” to “How Changing Transparency Policies Will Affect the International Attendance at Congresses.”

Another session, led by Bauler, with a panel of three medical meeting show organizers, detailed different ways associations chose to do their advance space selection.

One show started their space selection for the following year before the current year’s show, another did most of it at the actual show and the third started the process after the show.

Natalie Morris, exhibits manager for the America Society of Oncology, said that their show is held at Chicago’s McCormick Place every year, so it makes it easier to start the space draw 13 months out.

“It gives us the rest of the year to market and push other things, like attendance,” she added.

Besides the education and networking, which included an opening party at the House of Blues and a closing party at the Rock and Roll Hall of Fame and Museum, there also were a few opportunities to give back to the local charity chosen by HCEA this year – the Garden Valley Neighborhood House, which helps people in need.

Attendees could take part by assisting with painting, landscaping, re-finishing floors, etc., at the actual house or playing in the HCEA’s annual “Chip for Charity” gold tournament, as well as each attendee received colored stickers when they picked up their badge that they could give to booths on the showfloor and each sticker represented monies the exhibiting company would donate to the charity.

Pennington said of the overall meeting, “HCEA is the meeting where people go to get the education that they can’t get anywhere else. We want people to take things home they didn’t know before they got here.”