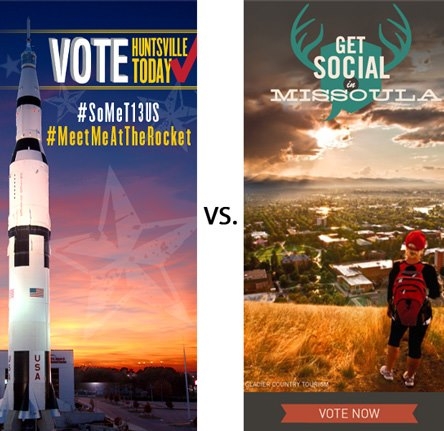 When the Social Media Tourism Symposium (SoMeT13US) had to choose a host city for their annual summit, they practiced what they preached and let their community decide via Facebook voting.

Voting began in March with eight cities competing in a bracket-style contest on Facebook using the Woobox voting app. The winner of each round would advance until finally, on April 2nd, the final round of voting took place.

While it’s certainly an interesting and social way of selecting a host city, it’s benefits go beyond entertainment. David Serino, founder of SoMeT, explained that the voting process raises awareness of the economic impact of events far beyond those who are in the business.

Competing cities get their entire community involved in the voting, not just those businesses directly related to tourism and events. Soccer moms, plumbers and retirees also take part and, as a result, they are exposed to the business of meetings and events.

Jessica Carlton, marketing manager for the Huntsville/Madison County Convention & Visitors Bureau, said of her city’s win, “We were so humbled and excited to see the community come together to help us. Huntsville is a very competitive area by nature. In the 1960s, we literally helped put a man on the moon, so it’s ingrained in our culture.”

Ad4! Group is one such Huntsville business that embraced the idea of competition. They created a video featuring Huntsville residents and business owners telling their own story of why they love Huntsville. “We didn’t ask them to do it, they did it out of the goodness of their hearts” Carlton said.

The final round of voting came down to a battle between Huntsville and Missoula, Mont., with Huntsville winning the contest by just 3000 votes out of about 24,000.

But Missoula and the rest of the competitors were in no way losers. Through the contest, all cities involved generated plenty of awareness and media attention for their towns. Huntsville newspaper columnist Mark McCarter wrote a tongue-in cheek-piece about the competition with Missoula.

In that piece McCarter wrote, “I wanted to stand up today and scream, Maul Missoula. Except now I want to go there. On my bucket-list, drive-across-the-northern-U.S., Missoula is now on the route.

Last weekend, the Huntsville/Madison County CVB hosted a celebration for their community to say thank you. Carlton said, “It was a good chance for us to have an open house and thank them for the SoMeT vote.”

The SoMeT13US Symposium will take place Nov. 6-8. The people of Huntsville are looking forward to not just this event, but also many others, as now they are a part of this business of meetings.

Seattle Wins Bid to Host 2019 U.S. – China Tourism Leadership Summit
Visit Seattle and Brand USA will host the 13th Annual U.S.–China Tourism Leadership Summit in Seattle September 2019. More than 200 attendees are expected to attend from…
Social Stalking - How It Will Help You Win Leads at Shows and Beyond
My first company focused solely on online reputation management, so I have a relatively strong digital presence and am generally off put when someone doesn’t “Social Stalk”…
4 Ways to Measure Social Media Success
Social media success involves more than having tons of followers and likes. Significant reach and impressions can be vital ingredients to your social media soup. However, the…
Social Media Tips for a Successful Trade Show Booth
Small and big businesses alike have found out just how powerful social media can in helping their company expand.  In fact, according to CeBIT, the massive German…
Social Media Tips for Trade Show Success
Like so many other spaces in the business world, today’s trade shows are fueled by social media conversations and the buzz they create. Here’s a look at how you can leverage…
Feeding the Social Media Monster – Part One
Whether you are a company or an individual professional, your social media presence or absence drives your visibility and branding. In addition, just planting your stake in…