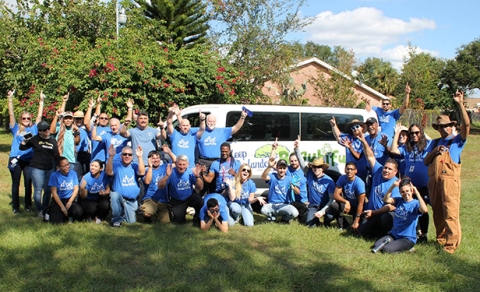 This article is the second in a series that we will be running throughout the holiday season shining a bright, well-deserved spotlight on companies that are #GivingBack.

The International Association of Exhibitions and Events, Smart City Networks and Caesars Entertainment have been working overtime to give back and make a difference in the lives of the less fortunate.

The International Association of Exhibitions and Events (IAEE) turned giving back into a late-night party by raising $15,000 during Humanity Rocks – A Celebration with A Cause, held Nov. 29 at the Aztec Theatre in San Antonio, Texas.

Proceeds from Humanity Rocks were donated to Boysville, a children’s home and shelter that has served the San Antonio community for more than 70 years.

“Humanity Rocks has become a ‘must do’ activity at Expo! Expo! not just because it is a great networking opportunity and a lot of fun, but also because it allows the professionals in our industry to rally around a great cause,” said Grouzard.

He added, “GES is proud to sponsor this spectacular event each year.”

Founded in 1943, Boysville began as a refuge for orphaned, homeless and abandoned boys sleeping in San Antonio’s Travis Park. In an effort to keep siblings together, the organization began accepting girls into the program in 1986.

In 1995, Boysville added an emergency shelter to allow for the placement of boys and girls coming from a crisis situation and in 2004, expanded its continuum of care by accepting its first infants onto the campus.

“We are so grateful to IAEE and GES for selecting Boysville as their charity this year,” Tucker said.

She continued, “This donation will help us give children in need a home and a chance to grow into healthy, responsible adults. Each year, we care for over 300 children who have faced so many hardships in their young lives. We are successful because of the wonderful community support.”

In addition to the proceeds from Humanity Rocks, Expo! Expo! attendees donated items including clothing, toiletries and toys to help the children of Boysville.

“Each year, IAEE and GES team up to offer our industry the opportunity to give back to Expo! Expo!’s host city,” said David DuBois, IAEE president and CEO. “Corporate social responsibility programs such as Humanity Rocks are a perfect example of the positive impact that exhibitions and events have on local communities.”

Last month, Smart City Networks kicked off its first annual nationwide Week of Service initiative to give back to the communities surrounding all 39 of its partner facilities.

During the week of Nov. 13-19, Smart City team members from around the nation volunteered to assist local charity organizations that were thoughtfully selected to provide the greatest impact possible to those in need.

“Our team members across the country are always finding ways to give back,” said Mark Haley, president of Smart City Networks, provider of telecommunications and event technology services to the convention industry.

He continued, “After immense positive feedback from our management team following our participation in the Salvation Army’s Christmas Assistance Program during our 2016 general managers meeting in San Antonio, we wanted to share the experience of giving throughout our entire organization.”

In early November, teams in Orlando, Tampa and Miami Beach joined cleanup crews on a mission to Keep Florida Beautiful with their local affiliates, while Smart City teams in Los Angeles, Anaheim and Long Beach assisted We Give Thanks with preparing a Thanksgiving Day feast for the homeless and less fortunate in Southern California.

While the majority of this work was completed during the Week of Service, teams started their projects in October and continued their charitable efforts through the end of November.

After a successful and rewarding first year, Smart City plans to repeat its Week of Service in 2018.

In an effort to help reduce the spread of disease, Caesars Entertainment employees hand-delivered thousands of bars of soap to hundreds of families in Guadalajara, Mexico.

The distribution effort took place in early November in collaboration with The Service Companies and Clean the World Foundation, the largest global recycler of hotel amenities that works to prevent millions of hygiene-related deaths each year by distributing recycled soap and hygiene products to impoverished people throughout the world.

She continued, “Not only are we engaging our team members to help to reduce the spread of bacterial diseases by distributing soap, but we are recycling nearly 50 tons of soap and bottled amenities from our properties annually.”

The soap was hand-delivered to young children and their families by Caesars employees and The Service Companies’ team members, who were awarded the trip after being nominated to participate by their colleagues.

The employee engagement competition with Clean the World and The Service Companies has taken place annually for five years, giving team members the unique opportunity to see for themselves how recycled soaps and shampoos from Caesars properties are saving lives.

In addition, contest winners had the chance to conduct hygiene education for disadvantaged children through age-appropriate skits and songs.

“Working with Clean the World to collect and recycle leftover soap was a project originally started by housekeepers in Las Vegas,” explained Heather McAuley, a beverage server at Caesars Windsor.

She continued, “I was humbled to spend a week with a fabulous group, including housekeeping colleagues who make this program happen. The gratitude shown through the smiles on these beautiful children’s faces touched my heart.”

Together with Caesars Foundation, a private foundation funded by resorts owned or operated by the company, Caesars Entertainment has supported Clean the World since 2010, gifting $3 million to the organization in financial contributions, pounds of soap and volunteer hours.

Caesars’ North American hotel properties have collected more than 2.3 million bars of soap to be sanitized, reformulated and distributed in 118 countries. In 2017 alone, more than 257,000 bars have been distributed from Caesars properties.

Making a Positive Impact is Par for the Course at NACS
This article is the first in a series that TSNN runs throughout the holiday season shining a bright, well-deserved spotlight on event companies that are #GivingBack to make a…
Georgia World Congress Center Space Used to Educate, Entertain Local Community
Even though the Georgia World Congress Center is one of the country’s largest convention center venues with 1.3-plus million square feet of exhibit space, the building is…
Smart City Networks Adopts SIP Trunking Nationwide
Smart City Networks, a provider of technology and telecommunications services for the convention industry, has embarked upon a process to convert phone lines at 39 convention…
Green Interview: Gwen Migita, Social Impact & Inclusion Vice President and Chief Sustainability Officer, Caesars Entertainment
Caesars Entertainment is an acknowledged industry leader in corporate social responsibility through its People Planet Play framework. In the past few months, the company has…
Smart City Networks Keeps Houston Connected in Hurricane Harvey Aftermath
Smart City Networks has been playing a different kind of role in Houston this past week. Instead of supporting the technology and data needs of trade shows at the convention…
People News: Destinations International, IAEE, Offprice and More Make Hires
Summer’s coming to a close, the kids are back in school, and companies in the meetings and hospitality space are ramping up hires for the last third of the year. Take a look…