IMEX America Breaks Records Across the Board in Las Vegas 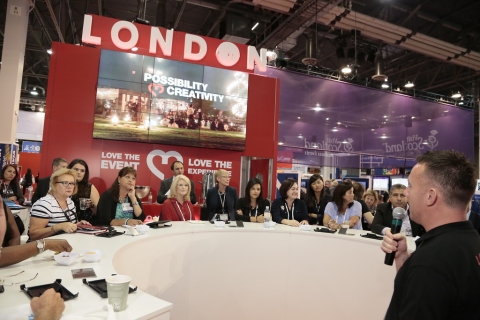 As the 5th IMEX America wrapped up in Las Vegas, records were broken across the board, with a total of 3,100 companies representing 150 countries exhibiting, including 80 new booths and 56 expanded booth.

In addition, the IMEX hosted buyer program brought a record 3,000 buyers from 54 countries to the show, for a total 10,600 people participating in the event.

There were 66,000 business appointments of which more than 57,000 were one-to-one appointments and booth presentations.

More than 40 leading buyers from the corporate sector also came for the annual Executive Meetings Forum. With senior executives from Merck, Cisco Systems and Wells Fargo attending, together they controlled annual meetings budgets in excess of $3 billion.

For video highlights by Convention News Television click HERE. The event was held Oct. 12-15 at the Sands Expo & Convention Center.

“I’d like to congratulate MPI, our strategic partner and premier education provider, on the tremendous success of Smart Monday, which grows year after year,” Bloom said.

A new educational initiative, the Play Room, sponsored by Play with a Purpose, drew 350 participants on the first day and several hundred more when it moved on to the showfloor for three days.

There were several networking and education events held by different associations throughout the week, such as the MPI Foundation Rendezvous,IMEX America Night, Association Evening and the CIC Hall of Leaders.

“We are delighted that so many industry events are coming together here using IMEX America as a hub for successful fundraising events such as the MPI Foundation Rendezvous, the CEIR Golf Classic and SITE Nite, as well as education activities, social networking and industry meetings,” Bloom added.

The new wellness initiative, “Be Well at IMEX,” also was introduced and included a meditation room and the first IMEXrun Las Vegas - Inspired by Rio de Janeiro, in advance of the Olympics. Sponsored by RioTur and Embratur and organized by sports by tlc, the route took in a section of the famous Las Vegas Strip. Four hundred and twelve exhibitors and buyers took part in the run.

CES 2017 Showfloor Breaks Record in Las Vegas
CES, the world’s largest consumer technology trade show, had yet another record-breaking year. Held at the Las Vegas Convention Center and venues throughout the city Jan. 5-8…
Vision Expo West 2018 Breaks Attendance Records in Las Vegas
Vision Expo West celebrated its 30thanniversary by achieving a nearly double-digit increase in attendance compared to the year before.  Held Sept. 26-29 at the Sands Expo in…
Ray Bloom: Imex America Is a Go for November in Las Vegas
Proclaiming the industry is sick of virtual events, IMEX Group Chairman and Founder Ray Bloom reaffirmed that the company’s signature trade show, IMEX America, will happen as…
Largest Ever IMEX America Kicks Off in Las Vegas
Today is opening day for IMEX America 2018, the country’s worldwide exhibition for incentive travel, meetings and events. Held annually at the Sands Expo and Convention…
InfoComm International Breaks Exhibitor, Showfloor Records at Las Vegas Convention Center
InfoComm International, for the commercial audiovisual and information communications industries, saw record growth in not only exhibitors, with 1,000 on the floor and 211 of…
ISA International Sign Expo 2017 Breaks Participation Records in Las Vegas
The ISA International Sign Expo 2017 enjoyed a record-breaking show in Las Vegas. Held April 19-22 at the Mandalay Bay Convention Center, the annual trade show and conference…