China’s newest and largest convention center, Shenzhen World, opened in early November. The venue, which will be the biggest exhibition and convention center in the world once its Phase 2 construction is completed, is also aiming to be the most sustainable and most intelligent. One thing is certain: The impressive facility will play a significant role in growing the region’s economy.

Located in the Pearl River Delta, Shenzhen is China’s technology innovation hub and home to more than 3 million businesses. The city has grown from a small fishing village to a metropolis in just three decades — from 30,000 to 12.5 million people — the highest growth rate among major Chinese cities.

Shenzhen’s local government is heavily invested in research and development to fuel additional growth. In 2015, the government determined that the city’s existing convention and exhibition facilities would not be able to scale to meet future demand. Management consultancy firm JWC GmbH, which specializes in trade fairs and conventions, was brought in to help develop plans for a new venue.

JWC used both industry knowledge and benchmarking of other exhibition and convention venues to make its recommendations — but went into the project feeling confident about the location. “For me, it's very, very clear that Shenzhen will be, economically, the No. 1 city in China, possibly even in Asia,” says Jochen Witt, JWC president and CEO.

Built in record time — less than three years from conception to completion — Shenzhen World already has many events on the books. The Bao’an Industry Development Expo, and Shenzhen International Intelligent Equipment Industry Expo & International Electronic Equipment Industry Expo were the first events to be held in the venue, with four halls fully booked and about 40,000 visitors. The 2019 International Youth Innovation Conference and the Greater Bay Area Industrial Expo were also held at Shenzhen World in November

With the completion of its Phase 1 build, Shenzhen World offers 400,000 square meters (4.3 million square feet) of flexible exhibition and meeting space. Once Phase 2 is complete, the venue will have a total of 500,000 sqm (5.38 million sq. ft.) of exhibition space — making it larger than Germany’s Hannover Messe, which is currently the largest convention and exhibition center globally.

Sixteen 20,000 sqm (215,278 sq. ft.) column-free exhibition halls are arranged along a central corridor, with people movers located on the facility’s second level. While the halls on the main level all have air conditioning (once a rarity in China, but rapidly growing due to the heat and humidity levels), the upper level does not, saving both on costs and energy consumption. Instead, it features an open glass ceiling cover that provides both some air and natural light for attendees as they move from place to place, and signage in both Chinese and English to help people find their way.

The venue also has three event halls, including one 50,000 sqm (538,196 sq. ft.) mega-hall that can comfortably hold 12,500 people. There are eight decentralized conference areas next to each hall, with more than 130 meeting rooms throughout the facility. The North Hall features one hall designed as a conference center area, with a ballroom that can hold up to 6,200 attendees plus 22 meeting rooms in addition to the main 20,000 sqm (215,278 sq. ft.) space.

When it comes to dining, Shenzhen World has 50,000 sqm (538,196 sq. ft.) of restaurants, including international cuisines with full-service, self-service and grab-and-go options as well as convenience stores and coffee shops. Among the first to open were a KFC, 7-Eleven and several cafes. Additional eateries will be opening over the next few months. The facility also offers four rooftop gardens with views of the city that can be used by visitors or booked by event organizers for gatherings.

The new venue is located in Shenzhen Airport New Town, which will be the center of the Guangdong-Hong Kong-Macao Greater Bay Area. The town is growing at an exponential rate alongside Shenzhen World, with new infrastructure and hotels springing up to support the influx of workers and visitors. When complete, New Town will encompass two islands, three districts and multiple travel corridors.

Shenzhen World is approximately 20 minutes from Shenzhen Bao’an International Airport by taxi and 75 minutes by taxi or an hour by ferry from Hong Kong International Airport. For those driving in, venue access is available directly from the highway, and there are 9,100 visitor parking spaces in an underground lot. There is also a dedicated truck marshaling yard that can hold more than 1,000 vehicles — although this will change with the Phase 2 expansion. A venue shuttle is currently provided from the Tangwei subway station, and soon, two new subway stops will deliver attendees directly to the two registration lobbies.

Gerd Weber, senior venues expert and JWC partner, says that the venue is setting new standards globally, both due to the way it was planned and has been constructed. He adds that the location provides great opportunities. “The venue is located in the heart of one of the economically strongest areas of the world; it has an excellent infrastructure; it has direct connections to the high speed rail system of China and is located close to the airports of Hong Kong and Shenzhen. In terms of overall potential, there are few venues in the world which can match these conditions.” 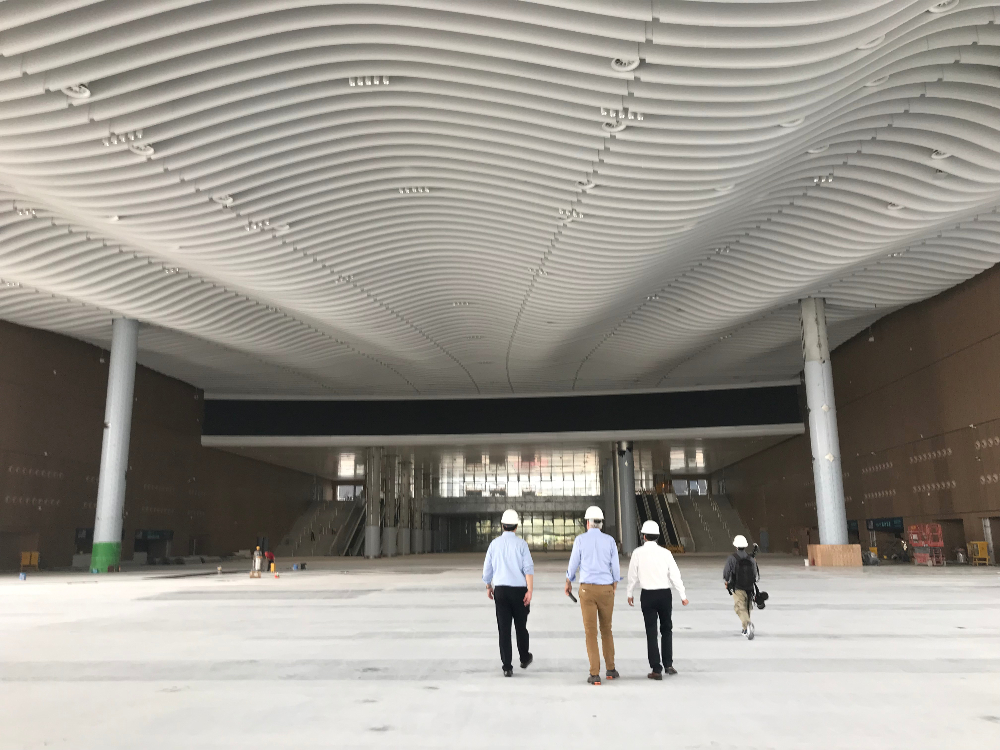 Shenzhen World was built for sustainability from the ground up, with the aim of achieving the No. 1 spot for exhibition and convention centers in low-carbon and savings on land, energy, water and materials. Shenzhen Zhaohua International Exhibition Operation Co., which manages and operates Shenzhen World, is applying for a two-star Green Building Label, LEED Gold certification and three-star BREEAM status for the venue.

The facility uses the latest in rigging technology and has the world’s largest rainwater collection system in a single-block building. And through optimization of fencing, HVAC system and lighting and facility system, the project energy consumption per square meter is much lower than that of other similar buildings.

Rather than developing its own standalone app, Shenzhen World worked with Tencent to leverage WeChat and is also working with the technology provider on its smart building initiative. Information available in the Shenzhen World WeChat platform includes navigation, restaurants, courier services, business centers, Wi-Fi services, parking and airport services.

Tencent has already developed an Internet of Things-driven, building-wide system within its own Shenzhen headquarters. The smart building has room temperature automation based on usage, access controlled via facial recognition, and security features including the ability to set digital perimeters that will trigger an alarm if crossed. All of these features could be very useful in an event setting.

In the future, Shenzhen World officials say new services such as an interactive experience platform, VR navigation and more will be developed to provide both show organizers and attendees with additional smart digital event experiences.

To learn more or to watch a video of Shenzhen World, go here.