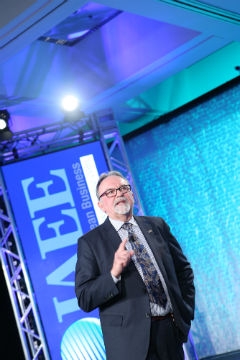 More than 2,000 trade show organizers and suppliers were in Los Angeles this week to take part in three days of networking, education sessions and a bustling showfloor at the 2014 International Association of Exhibitions and Events’ Expo! Expo!

The exact number of attendees, 2,104, was a significant jump, compared with 2013, with also more than 1,000 show organizers on hand this year.

"The 2014 Expo! Expo! has exceeded our expectations so far. We have a record number of show organizer attendees, specifically a 30 percent increase over last year, and our overall attendance has increased by 23 percent,” said IAEE President and CEO  David DuBois.

He added, “Feedback I've received from attendees is that they're really enjoying the new features we've added to the 2014 show."

The event was held Dec. 9-11 at the Los Angeles Convention Center.

One of the many highlights of Expo! Expo! is a joint session held between IAEE and the Society of Independent Show Organizers.

This year’s session focused on “How Do Independent Show Organizers and Associations View Each Other”, with Jordan, Edmiston Group, Inc.’s Richard Mead moderating a discussion with Hanley Wood’s Rick McConnell and the National Association of Broadcasters’ Chris Brown.

Hanley Wood has acquired several association shows in the past. “If there was a good thing that came out of the recession, we’re seeing a lot of strategic partnerships that would not have happened before,” McConnell said.

The opening general session kicked off the Los Angeles Mayor Eric Garcetti welcoming the crowd and joking, “Thank you for coming back, even though it took about two decades.”

Outgoing IAEE Chairperson Skip Cox took the stage and told the capacity crowd of the many IAEE successes in the past year, including Exhibitions Day, in which more than 100 show organizers went to Capitol Hill to talk about the value of events, as well as the “Exhibitions Means Business” campaign, which has had an estimated $36 million impact in media value and nearly 40 million impressions.

IAEE membership also has seen a 13 percent increase in number of countries represented and overall membership grew by 4 percent in the past year.

The first day’s keynote, Fast Company Editor Robert Safian, encouraged people to not have a fixed mindset and be willing to accept change in order to succeed.

“(People) need to be in the right mindset to adapt to changes around us,” he added.

Putting a spotlight on the state of the industry right now, IAEE also held a media forum with several trade show industry executives who talked about current challenges.

DuBois said the overall industry is seeing growth, with 16 consecutive positive quarters, as tracked by the Center for Exhibition Industry Research.

Bradley Kent, who heads sales at the Dallas Convention & Visitors Bureau, said the recession caused a lot of consolidation in the industry. “Customers have more voice and more choice,” he added.

Megan Tanel, from the Association of Equipment Manufacturers, said, “We are questioning a lot of antiquated models,” adding that they are especially looking at rising costs that are not tied to receiving the same value.

The showfloor, packed with suppliers to the trade show industry, was held during a two-day period and drew 265 exhibitors to 39,000 net square foot of space.

The festivities kicked off with an outdoor opening party at L.A. Live featuring a holiday theme before attendees got back down to business the next day with sessions in the morning and another general session with Seth Mattison.

Mattison showed an organizational chart from the top down and pointed out most of the attendees in the room viewed the world this way, while the younger generations coming up saw the world more as an interconnected, ever-changing network.

He added that the Internet has empowered the younger generations. “They have access and they have a platform,” Mattison said. “They see people their age disrupting every industry.”

He also encouraged people to have a defined outcome objective for every meeting, to do their homework before talking to someone about their business and “ask killer questions”, but just ones like “What do you do?”

The rest of the three-day event featured Humanity Rocks annual networking event that supported a local charity, IAEE chapter receptions, a plethora of education sessions and a closing luncheon that featured IAEE Individual Award Honorees, including Vincent Polito, who received the Pinnacle Award, and Sarah Soliman, who was honored as this year’s Rookie award honoree.

In conclusion, AEM’s Megan Tanel accepted the passing of the gavel from Skip Cox and will start her year as IAEE’s new chairperson.