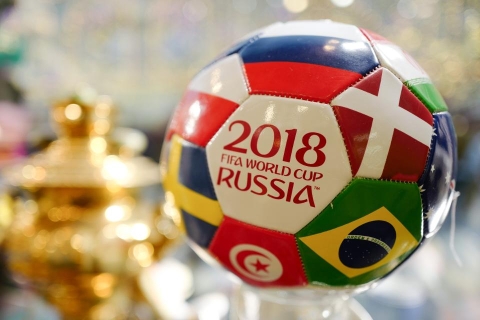 This week, we found out who will host the world’s largest and most passion-inducing event, For the Events Industry, it re-emphasizes a vital truth about our work, one we occasionally fail to put into practice.

The extravaganza in the spotlight is the 2026 FIFA Men’s World Cup, and its venues will be North American. Canada, Mexico, and the USA will provide a diverse setting for 48 national teams and over 100 stadium-filling matches.

Now, you may not follow soccer or think much about sports in general, but “The United Bid”, as it is called, is a massive win for the three nation’s economies, but mostly for the United States, which will host all but 20 of the games.

This festival of sport, with hundreds of thousands of colorful supporters visiting, could produce “staggering revenues of $14 billion”* for the host nations and provide “as much as $50 million more in distributions to each member nation than if the alternative bid [from Morocco had] prevailed”*.

(A note here -- FIFA’s acceptance of The United Bid seems free from corruption, from this writer’s perspective.  Yes, the U.S. Department of Justice’s 2016 indictments and recent prosecution of FIFA’s leaders has helped, after previous decades saw bribery as a standard among well-placed “football power brokers”. As should be obvious, even the least corrupt companies or places in the world still require good governance!)

That said, there is one big reason why for The United Bid’s success matters greatly to event professionals. Yes, North America have “ready-to-use” stadiums and infrastructure, and no government needs to take out a loan, as so many hosts of Olympics or World Cups of the past have needed.

However, it’s actually business travel and face-to-face meetings that sealed the World Cup deal for the three host countries.  ESPN.com reported on 6/13/2018 that the three Soccer Federation presidents (USA’s Carlos Cordeiro, Canada’s Steve Reed, and Mexico’s Decio de Maria) spent months “on the road, crisscrossing the globe to meet with as many federation leaders as possible,” with each of these leaders “sometimes visiting as many as three countries in a single day.”*

To earn the votes of the 134 of 199 Soccer Federations across the planet, Cordeiro said, "I'm convinced that it was critical to get in front of people, face-to-face … They are elected federation officials just like we are, and you can relate to them because of that -- whether it's a big country or a small one."*

Cordeiro’s words and strategies should resonate with every savvy Events Industry professional. He, Reed, and de Maria built empathy and showed shared passions for their game by looking into the eyes of their fellow Federation presidents and listening to their concerns.

With their personal outreach, done with an eye on real influencers and “swing voters” (those without an obvious reason to choose Morocco or the United Bid), the North American leaders earned the right to respond to the concerns of “footballing” leadership from outside the continent.

Certainly, speed bumps blocked the way for the 2026 hosts, including fears based on the increasingly caustic tone from shock-inducing news headlines and pronouncements of more strident US immigration policy.

Other federations asked, would US Officials even WANT to handle thousands of additional visas for fans traveling across borders, both within and across all three nations?

Yes, the presidents assured their peers, all three nations were united in welcoming visitors, saying “the well-established economy and corporate structure in the United States... is already set up to handle all aspects of a massive event like a World Cup.”*

In every North American and Caribbean nation, business and leisure travel drive revenue growth and provide evidence of a vibrant economy.

Yet, Events Industry “lifers” and “newbies” alike can sometimes forget to implement what de Maria, Reed, and Cordeiro believed and spent time to fulfill.

Convention Centers can’t just welcome attendees and other visitors when they arrive to their facilities.

Additionally, suppliers who go to visit their prospects tend to get approval from decision makers on almost any contract (whether for digital platforms, physical products, or event-related services).

We know this, but it bares repeating -- influencers like it when we look them in their eyes, build their trust, and reach their hearts and minds directly. The United Bid succeeded at it, and so can we. Here are a few applications, but share some more in the Comments section below.

So, members of the Meetings Industry, get out there and meet!  Let’s get our passports stamped! Regardless of where, you yourself should use the Events and Travel Industries. And REGARDING when, do it while balancing your life; tell the boss you can’t miss a family event, even if it’s your routine drop-off of your daughter to Saturday soccer practice.

But whatever you promote, let your “United Bid” earn the prizes your employer wants the most -- big contracts -- by playing on the field of your best prospects.  You always win more trust, and generate higher, more consistent ROI.

U.S. Travel Sets Future-Forward Recovery Plan, With Business Travel and Events Top-of-Mind
U.S. Travel Association leaders outlined a path forward during the organization’s annual State of the Industry Address on Feb. 2, which highlighted the progress made since…
Events Industry Sounds the Alarm Over Sluggish Business Travel
Business travel appears to be still stuck in quarantine as Americans begin returning to pre-pandemic levels for vacations and road trips. If this trend continues, meetings…
MPI World Education Congress Demonstrates the Power of Face-to-Face Meetings
More than 1,200 event professionals gathered at MPI’s World Education Congress at CAESARS FORUM last week, the largest in-person industry event so far this year. While…
IPW Will Collocate With Connect Travel Events in 2021
The U.S Travel Association has agreed to partner with Connect Travel for a multi-event trade show in Las Vegas, set for Sept. 12-22, 2021. The centerpiece of the event will…
Meetings Mean Business Report Indicates Executives Find Value in Face-to-face
Not only do business leaders say in-person meetings are beneficial to operations, according to a new survey released by the national coalition Meetings Mean Business, but…
2015 Music China Will Be the Biggest Yet
This year’s Music China, taking place Oct. 14-17 at the Shanghai New International Expo Centre in Shanghai, will be the biggest ever with 105,000 square meters of…