LIGHTFAIR International Heads Back to Big Apple in 2015 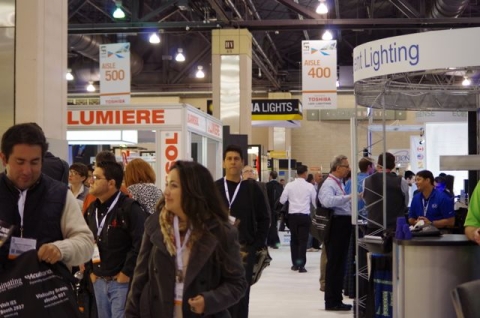 After holding the last show in the Big Apple in 2009, LIGHTFAIR International will head back in 2015 to the Jacob K. Javits Convention Center of New York.

"We’re pleased to return to a renewed and refreshed Javits Center, which affords LIGHTFAIR the opportunity to continue its growth track in an environment well-equipped to serve our customers’ rapidly evolving and expanding needs," said Jeffrey L. Portman, Sr., vice chairman and president of AMC, Inc.

Produced and managed by AMC, Inc., the show runs in an annual East-West rotation, and after what the company called “exhaustive independent LFI customer research” and a unanimous vote of LFI partners the Illuminating Engineering Society (IES) and the International Association of Lighting Designers (IALD), the decision was made to take the show back to New York City.

When LFI was held there in 2009, it not only scored record-breaking attendance, but also had a sold-out showfloor. The show will be held May 3-7 next year at the Javits.

LFI, billed as the world’s largest annual architectural and commercial lighting trade show, will benefit from the $465 million renovation and expansion project that added 110,000 square feet of space to the Javits.

Renovations also included the installation of a new 240,000 sq. ft. glass curtain wall and the construction of the largest green roof in the Northeast.

LFI 2015 exhibitors and attendeeswill have the opportunity to experience the bigger center, as well as the new energy-efficient lighting, marked by the daylighting from the glass curtain wall.

Next year’s pre-conference program will be held May 3-4 and the trade show and main conference is on tap May 5-7. This year, the show is scheduled June 1-6 at the Las Vegas Convention Center.

LFI was honored at the 2014 TSNN Awards in Reno, Nev., for being voted the top “Best of Show” for its innovations, as well as one of the top 25 fastest-growing shows for net square footage.

International Design Alliance Heads to Gwangju, South Korea, in 2015
The International Design Alliance has chosen Gwangju, South Korea, as the next host city of the 2015 IDA Congress. The city was selected based on the strength of its bid, co-…
LIGHTFAIR International Lights Up Las Vegas
Go to enough trade shows and you’ll notice that every event seems to have its own personality, flavor and attitude. Some shows are innovative and visually appealing,…
LIGHTFAIR International Switches to San Diego for 2016
AMC’s LIGHTFAIR International typically rotates annually between the West and East, with its long-time Western home being Las Vegas, but in 2016, the show decided to…
LIGHTFAIR International Expected to Set All-time Show Record
If the activity on the showfloor at LIGHTFAIR International (LFI) is any indication of the health of the trade show industry, expos are back in business. Not only were the…
in-cosmetics Asia Bounces Back
Reed Exhibitions recently released the results of its delayed in-cosmetics Asia show. The exhibition was originally scheduled to be held in November in Bangkok, Thailand.…
Reed Travel Exhibitions’ AIBTM Will Change Name, Scale Back Event in 2015
Since Reed Travel Exhibitions’ AIBTM launched a few years ago in Baltimore, its model has been to have a showfoor filled with suppliers who wanted to show off what they…