LIGHTFAIR International Will Head Back to Philadelphia in 2017 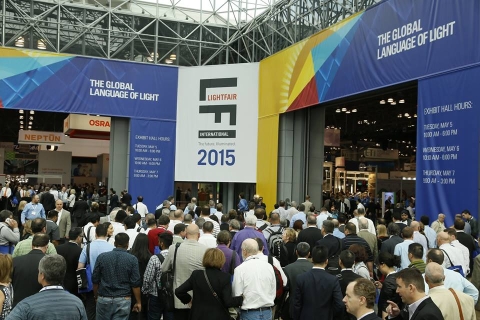 Produced annually alternately on the East and West Coasts, LFI was last staged at the Pennsylvania Convention Center in 2013.

LFI 2015, held at the Jacob K. Javits Convention Center of New York in May, broke all registration and trade show records with double-digit growth marking the largest staging in its history. It set an all-time trade show floor record with 268,580 net square feet, housing 599 exhibitors.

Registration grew to 29,900 attendees, a 15 percent gain, compared with the previous record set in 2014, with representatives from 89 countries.

“Philadelphia and the Pennsylvania Convention Center afford our global customer base a highly accessible and accommodating venue, well-scaled to the expanding space and service demands aligned with LFI’s continuing growth,” Portman said.

He added, “Our 2013 experience there was positive and productive.  We fully expect LFI’s 2017 showing to exceed those high marks.”

LIGHTFAIR International brings the industry’s newest and most advanced products and technologies to a global attendee population of lighting designers, specifiers, architects, consultants and engineers from around the world.

LFI is sponsored by the Illuminating Engineering Society (IES) and the International Association of Lighting Designers (IALD).  The event is produced and managed by AmericasMart Atlanta.

LIGHTFAIR International Will Head Back to Vegas in 2020
In response to the enthusiastic feedback of its attendees and exhibitors, LIGHTFAIR International will return to Las Vegas for its next West coast show in 2020. Staged…
LIGHTFAIR International Heads Back to Chicago After 23-Year Hiatus
LIGHTFAIR® International (LFI) has announced it will hold its 2018 trade show and conference at McCormick Place in Chicago. Set for May 6-10, the event will mark LIGHTFAIR’s…
LIGHTFAIR International 2017 Boasts Largest Trade Show to Date in Philadelphia
LIGHTFAIR International boasted its largest show and Philadelphia registration numbers at its most recent event, held May 7-11 at the Pennsylvania Convention Center. The…
CES Is Headed Back to Las Vegas in 2022
CES, the U.S.’s largest trade show and the world’s most influential technology event, will return to its longstanding home of Las Vegas Jan. 5-8, 2022. Set to take over the…
Medical Apps Will Go Head to Head During MEDICA 2014
Developers of medical apps will have the opportunity to present their creations live at the App Competition during MEDICA 2014, World Forum for Medicine, to be held Nov. 12-…
Trade Shows Will Be Back – Here’s Why
As many activities and businesses have come to a screeching halt during the Coronavirus pandemic, we’ve started to see some businesses allowed to slowly reopen, and …