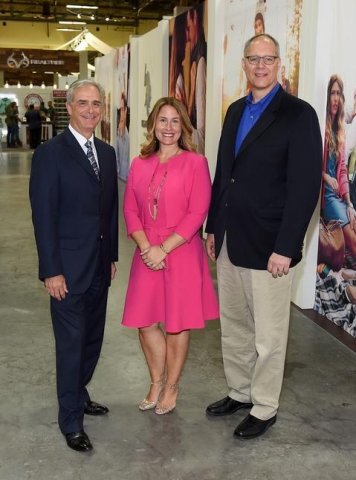 The first show to take advantage of all of the extra space at the Mandalay Bay Convention Center was one it long-time clients, UBM Advanstar’s MAGIC, which ran last week in Las Vegas.

The $70 million project added 350,000 square feet onto the center, allowing shows like MAGIC to not only expand, but also opening up more space for shows looking in the city.

“We have enjoyed working with the professionals at Mandalay Bay throughout the years and appreciate their willingness to help us create the most positive, productive experiences for our customers,” said Tony Calanca, executive vice president of Exhibitions for UBM Advanstar.

He added, “Mandalay Bay changed their construction plans to meet our growth needs, and we are proud to have MAGIC be the first show in the new expansion.”

Based on customer demand, the resort built new exhibit space, a 20,000 sq. ft. foyer and underground parking in this first phase.

The second and final phase of the expansion will transition existing space into a 70,000 sq. ft. carpeted ballroom to accommodate new corporate partners and associations, as well as achieve greater utilization of the entire facility.

“The opening of our convention center expansion is another exciting milestone in the multi-year transformation of our resort,” said Chuck Bowling, president and COO of Mandalay Bay.

He added, “The response to booking the space has exceeded our expectations, and we believe this investment will increase visitation to Las Vegas, driving incremental business to MGM Resorts’ portfolio and the city overall.”

Construction began in October 2014 and upon completion of this project in January 2016, the Mandalay Bay Convention Center will boast more than 2 million total square feet and 900,000-plus sq. ft. of contiguous exhibit space.

This new space elevates its ranking in North America to No. 5 in both total square feet and exhibit space.

Stephanie Glanzer, vice president of Sales at Mandalay Bay, said, “In addition to the convention center expansion, we recently announced and are undergoing our 3,000-room remodel.  These updates combined with numerous other new offerings and venues solidify Mandalay Bay as a top choice for corporate groups and trade shows of all sizes.”

He added, “One of our larger shows, MAGIC, is a valued loyal customer and we are pleased to welcome them as our first group into the new space.”

Upon completion in Fall 2015, the added portion of the array will generate approximately 1.9 MW with an approximate annual production of 3.4M kilowatt hours.

Covering more than 28 acres, the combined array will generate enough electricity to power the equivalent of 1,300 homes.