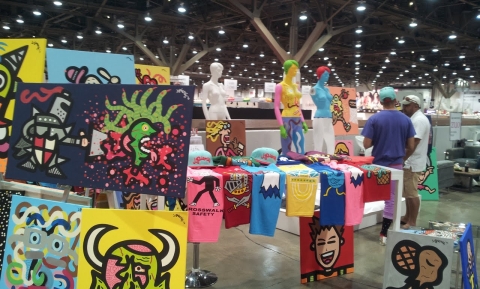 The biannual MAGIC Market Week rolled out the white carpet Aug. 18-21 across the Las Vegas Convention Center and Mandalay Bay Resort & Casino for the fashion event that just keeps on growing.

Owned by Advanstar Global, it is now comprised of 10 trade shows that focus on men’s, women’s and children’s apparel, swimwear, footwear, accessories and sourcing. This summer’s event spanned more than a million square feet at multiple venues and attracted 70,000-plus attendees and 6,000-plus exhibiting brands.

A recent $155 million acquisition of ENK International has played in significant role in increasing the show’s presence in women’s apparel and footwear segments.

Making such a large event a successful experience for buyers is no small feat, and much is invested in helping them find the gems that they are looking for.

“Everything we do is coming from a perspective of the buyer and making their shopping experience successful,” Lombardo said.

To add efficiency and inspiration, the show launched an e-commerce aspect of its Shop the Floor online platform, where buyers and brands can connect and now do business directly for a month before and after the show.

“You’ll always want to touch and feel the products, but it makes it easier to see them at the show and to have a visual memory afterwards,” Lombardo said.

While not easy to implement across all segments of Market Week, a curated approach to organizing the showfloor is gaining momentum, as complementing brands form ecosystems with shared culture and personality.

WWD MAGIC White and ENKVEGAS offered an elevated look by hand-picked designers. This year, PROJECT, built on the idea of one-stop-shopping for creative contemporary brands, launched several special sections, including footwear, California-inspired Threads and Fins and Indigo for premium denim.

At seminars, participants expressed concern about the U.S. economy during the next two years, as well as global uncertainty with stagnant EU economies and slowing growth in China.

Days before the show, top retailers, including Wal-Mart, Nordstrom and Kohl’s, cut annual profit projections, but at the same time, talked with cautious enthusiasm about the potential for growth in the apparel and shoe sectors.

On the showfloor, veterans, along with newcomers, offered a positive outlook on the industry.

Taking a break from writing orders, exhibitor Kellie Canning from Calif.-based Velvet Heart called this show “consistent”, even though this was not their high season. The company had taken a break from exhibiting two years ago, but has been back for three shows now. “We’ve picked up quite a few new clients, and existing customers are spending more,” Canning said.

Several randomly picked attendees and exhibitors said that they had either started their company or launched a new line in the past six months.

First-time attendee Lisa Ibias, with Alaskan Dames was at the show to scout out high-end designs for a new boutique she is opening in addition to her consignment store. She said, “We think it’s a good time (to open a store.) Spending is starting to come back again.”