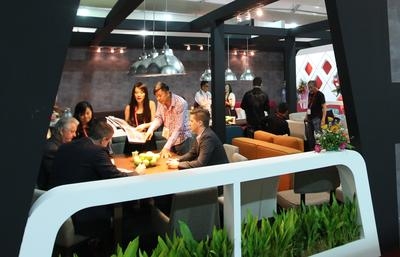 The five-day show had estimated sales of US$892 million and a 6 percent jump in attendees to 19,472 visitors, including 6,171 international buyers from 141 countries and regions.

The turnout of the international and local buyers has created more business opportunities to the 503 exhibitors from 13 countries and regions who were in the Putra World Trade Centre (PWTC) and Matrade Exhibition and Convention Centre (MECC) with their latest range and wide-variety of products.

Visitors to the 80,000 gross square meters event included a first-time delegation from Belgium Furniture Manufacturers Association, as well as trade groups from South Korea and Japan, among them was Ms Chie Kikuchi, Managing Director of Hikari Global Trading Co, one of Japan's biggest furniture importers.

"We have seen an increase in prices from China, so we are seeking new markets for Japanese customers. We are looking for companies in Malaysia and other Asean countries. Japan and Malaysia can collaborate in terms of design and the manufacturing of the furniture that cater to the Japanese market which is competitive and consumers are sensitive of market trends," said Ms Kikuchi.

The design prototypes from 10 finalists, culled from over 200 submissions, were produced with the help of MIFF exhibitors and sponsors and showcased in a specially design area at MECC, a culmination of six exciting months for the young talents who were rewarded with real-life experience and a platform to see their designs materialise in form, as well as interest from manufacturers and international buyers.

Gaining the most accolade in terms of design and marketability, the top prize was awarded to young industrial designer Francis Lye Aik Theng with XSR, a stylish light bar stool constructed from  stainless steel, a mountain bike spring absorber and a thermoplastic seat.

"Within the global furniture trade network, MIFF is commonly known for our type of 'home-style service and atmosphere meets serious furniture buyers.'  The entire team is pleased that our 20th anniversary event continued to embody our philosophy of serving our customers and industry well and with style,” said Datuk Dr Tan Chin Huat, Chairman of MIFF. “Of course, we are equally delighted by the speedy rebooking of exhibition space for next year's show, which takes place March 3-7."