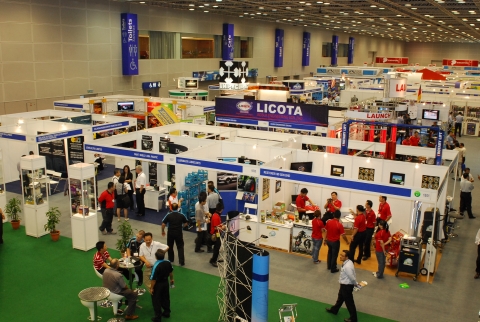 The final figure for last year’s group sales was €467.5 million.

“Even though 2011 was by no means an easy year from an economic perspective, we succeeded in further expanding our business activities,” said Wolfgang Marzin, president and CEO of Messe Frankfurt.

“We now generate 28.3 percent of our sales revenue outside Germany.” Marzin said. The man driver of foreign sales was shows held in Asia by Messe Frankfurt Asia, accounting for €81.9 million.

In 2011, Messe Frankfurt organized a total of 100 trade fairs and exhibitions worldwide. These were attended by some 3.4 million visitors and featured around 68,800 exhibitors.

A total of 31 trade fairs and exhibitions took place in Frankfurt, of which 14 were organized by the Messe Frankfurt Group itself, registering approximately 18,900 exhibitors and 742,000 visitors in all.

Six further events were held in other German exhibition venues, 63 trade fairs and exhibitions were organized outside Germany and Messe Frankfurt’s foreign events attracted an estimated 30,650 exhibitors and 1,063 million visitors – which also was a record for the company.

Looking into the future Marzin said of the first half of 2012, “In the first six months of 2012, we made important strategic decisions for our operating business,” Marzin said.

These decisions included the construction of the new congress building “Kap Europa” and the premature termination of the Group’s cross-border leasing arrangements.

For 2012, Marzin said the company expects positive sales to continue with revenues predicted to top the €500 million mark.

Messe Frankfurt also is looking to expand its global portfolio, with a total of 16 new trade fairs lined up for the company’s foreign portfolio in 2012 and 2013.

A new focus will be India, where debut events include Secutech India, Light India and ACMA Automechanika, according to Messe Frankfurt officials.