Messe Frankfurt Will Switch to Renewable Energy in 2020 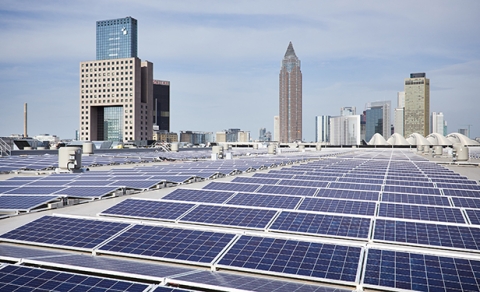 Messe Frankfurt will be powered completely by green energy starting next year. The world’s largest trade fair organizer is planning to source 100 percent of its electricity from renewable energy, including solar from its own solar power system, and hydropower or wind energy from its energy service provider, Mainova AG.

These clean energy sources will power the facility’s trade show booths, halls and exhibition grounds at the company’s base in Frankfurt, Germany.

With average energy needs comparable with those of a 40,000-person town, Messe Frankfurt’s switch from conventional to green energy sources with an optimized carbon footprint not only marks a further milestone in the company’s long-term sustainability goals, but is also a natural progression in the Group’s responsibly-minded business practices that could set the pace for other German trade fair companies.

“By switching over entirely to renewable energy sources, we eliminate some 19,000 tons of CO2a year,” said Uwe Behm, member of Messe Frankfurt’s Executive Board. “Given that 80 trees compensate for approximately a ton of CO2, you would need more than 1.52 million trees a year to offset this quantity of CO2.”

He continued, “As a partner, we are acting on the desire among our exhibitors and guest organizers for an environmentally friendly approach to trade fair management.”

According to Messe Frankfurt officials, renewable energy has been a priority at the facility for years, with three photovoltaic rooftop systems currently in operation. Since late last year, the facility’s third solar array system has also been generating energy from the sun’s rays.

Going forward, an estimated 2 GWh of energy is expected to be harvested from these systems every year, roughly the equivalent to meeting the electricity needs of 500 households.

With the demand for sustainable energy steadily increasing in recent years and a number of guest show organizers already using electricity exclusively from renewable energy sources, switching over to green power is yet another way Messe Frankfurt can do its part to protect the environment while driving its energy targets forward.

By moving ahead with this clean energy plan, the company is also playing its part in the ambitious climate protection plans of its shareholders, the City of Frankfurt and the federal state of Hesse, according to Messe Frankfurt officials.

“Mainova and Messe Frankfurt have been partners for decades and our companies have strong roots in their home city,” said Norbert Breidenbach, management board member of Mainova. “We also share a responsibility for protecting our climate.”

He continued, “Messe Frankfurt also embraces this responsibility in its capacity as a member of the Business Efficiency Network founded by Mainova. As well as this, we are eager to help our partners in stepping up their efforts for sustainable energy supply by providing them with tailored solutions.”

Messe Frankfurt operates an active energy management system and the targets set by its in-house energy team will be implemented under the supervision of the company’s energy manager, Behm explained.

“The sheer diversity of buildings on our exhibition grounds and the different ways in which they are built and used means that individual analyses are needed,” Behm said. “In the case of new buildings and renovations, forward-looking, energy-optimized construction and efficient operation are vital, for example with compound cooling systems between the exhibition halls.”

There are many small measures that are essential for efficient energy management at Messe Frankfurt, including adapting air-conditioning for specific facilities, preparing energy consumption graphics to raise employee awareness, or having an effective building automation system, he added.

Messe Frankfurt has been a member of the United Nations Global Compact since 2010 and is the first German trade fair organizer to join its ranks. The worldwide corporate social responsibility network is committed to sustainable corporate management and to the ten principles established in the areas of human rights, labor standards, environmental protection and anti-corruption activities.