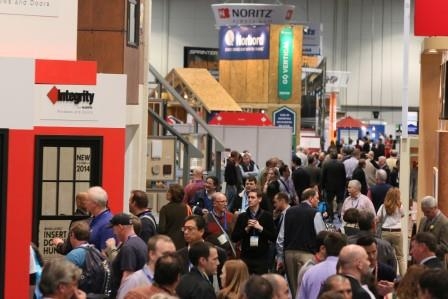 After a devastating downturn, the construction industry is starting to come back, and it’s on a roll. The trend is directly translating into a turnaround trade show.

NAHB projects 1.15 million total housing starts in 2014, up 24.5 percent compared with last year, and being back to normal production levels by 2015. Pursell noted the industry still is likely to face challenges with the supply of materials, labor and equity financing.

Launching the Design and Construction Week was the first step in bringing all the parties involved in construction together and help the industry recover faster.

“The whole ecosystem of homebuilding can network and talk about the industry issues,” he said. “We’re adding SURFACES and also talking to the Las Vegas Market Center to tap into the interior design part of the market.”

When asked about the biggest challenge of creating the Design and Construction Week, Pursell named finding meeting space for more than 500 meetings and educational sessions.

He added he expects that even more space will be utilized at the adjacent LVH hotel next year. “Launching has been a lot of work but Emerald Expositions and NKBA have been awesome partners,” Pursell said. “Attendees and suppliers are loving it.”

For KBIS exhibitor Tom Zak with Wine Logic, the new event has been a good deal. “We saw maybe 40 percent of our traffic from the Builders’ Show. The combination of two shows has been very helpful and it allowed us to get to the builders market faster,” he said. He’s noticing that more designers are willing to bring new ideas to consumers and offer products with higher margins.

Attendees Cathy Bergstrom and Kimberly Ambrose, with a homebuilder Miller and Smith, said they also see the resurgence of custom options for homes.

“People are starting to look for new trendy things,” Bergstrom said. “Colors and textures are important.” The pair had only come to IBS in the past, but this year, thanks to improving market and to the event collocation, brought a larger team and scheduled more appointments with suppliers.

“Having the two shows combined made a lot of sense for us. We’d love to see more in flooring,” she added.

In 2015, Design and Construction Week will expand even further with the addition of SURFACES and StonExpo/Marmomacc Americas Jan. 21-23 at the Mandalay Bay Convention Center in Las Vegas.

The next NAHB International Builder’s Show and KBIS will take place at the Las Vegas Convention Center January 20-22, 2015.

NY NOW Will See 73 Percent International Exhibitor Uptick at August Show
NY NOW, the Market for Home, Lifestyle + Gift, will see a significant uptick of international presence on its showfloor when it opens in a few weeks at the Jacob K. Javits…
2015 Greenbuild International Conference and Expo in D.C. Sees Big Attendance Uptick
The 2015 Greenbuild International Conference and Expo, owned and operated by Informa Exhibitions and presented by the U.S. Green Building Council and held Nov. 18-20 at…
Natural Products, Trucking Industries Both See Upticks in Shows
Two industries that couldn’t be more different – Natural Products Expo East and the Great American Trucking Show - both saw increases on the showfloor at their recent events…
National Restaurant Show Sees Record 8-percent Uptick on Showfloor in Chicago
The 96th annual National Restaurant Association Restaurant, Hotel-Motel Show and the collocated BAR (Beverage Alcohol for Restaurants) at NRA Show, held at Chicago’s…
Medical Design & Manufacturing West Show in Anaheim Sees Upticks in Attendance, Exhibits
This year’s Medical Design & Manufacturing (MD&M) West conference at the Anaheim Convention Center not only saw more attendee, but also they were engaged in a variety…
Trade Show Industry Sees 3.7 Percent Q4 and Full-year Uptick for 2015
The Center for Exhibition Industry Research’s CEIR Total Index, which tracks the overall health of the trade show industry, ended last year with a substantial uptick in not…