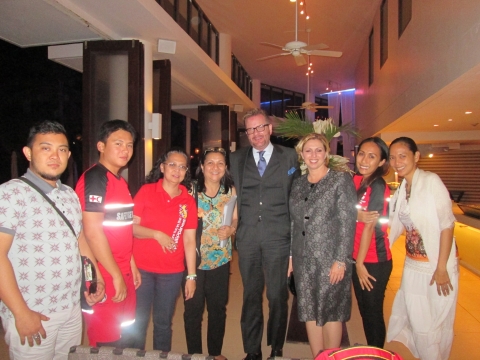 Last November, when Super Typhoon Haiyan devastated parts of the Philippines, beyond the loss of life and overall destruction, the country also dealt with a perception challenge in the aftermath.

Even though the typhoon, as well as a 7.2 magnitude earthquake that struck a month earlier, had both caused considerable damage, the capital city – Manila – and the other areas where conventions and meetings typically were held were virtually untouched.

In stepped two people - Liz Jackson and Susan Sarfati of the American Society of Association Executives (ASAE) and IMEX tradeshows - who had traveled to the Philippines in November of last year for the Associations Executives Summit and became advocates for how Manila was a great MICE destination and the fact that much of the country still was intact.

The duo contacted the New Orleans Convention & Visitors Bureau with the idea that that city also had faced major challenges after category 5 Hurricane Katrina had swept through and maybe they could help out the Philippines?

“We said, ‘We’ll do anything to help you’,” said Brad Weaber, executive vice president of NOCVB.

Weaber and Kelly Schulz, NOCVB’s vice president of communications and public relations, flew to the Philippines in late January and met with travel and tourism officials in several different cities to talk through what New Orleans did in order to conquer any misperceptions about the city being too damaged for meetings and conventions to be held there.

Besides the hurricane, New Orleans, too, had to manage another situation with the BP Oil Spill.

“We did just tremendous outreach (in the Philippines),” Weaber said. “Our key messaging was letting them know that it does get better.”

COO Domingo Ramon Enerio III of the Philippine Tourism Promotions Board said that they were “very thankful” that Weaber and Schultz had come to the country and shared New Orleans experiences in the aftermath of Katrina.

In addition, the New Orleans team shared their tourism marketing recovery program, which resulted in doubling their tourism arrivals from an all-time low of 3.7 million to 9 million in just 6 years.

“Realizing that our countries are bounded together with similar fate of being struck by the unprecedented double calamities, New Orleans through Hurricane Katrina and BP Oil Spill, while the Philippines through the 7.2 Magnitude earthquake and Super Typhoon Haiyan, NOCVB reached out and shared valuable experiences learned to the Philippines in addressing concerns for the recovery and rebuilding process of our devastated areas in the same way they applied to New Orleans,” Enerio said.

The trip consisted of traveling to a few destinations and meeting with key stakeholders, Weaber said, including the Secretary of Tourism and 120 association executives.

One of the lessons learned from the hurricane in New Orleans that Weaber said that they wanted to impart to the travel and tourism officials in the Philippines was they needed to educate people on geography.

In New Orleans, the majority of the area where meetings and conventions are held in the city was not impacted, and the Philippines, which is made up of 7,100 islands, saw most of the damage from the typhoon and earthquake in outlying areas.

“We would like to tell the whole world that the Philippines is still tourism ready, able and spectacular as there are other destinations in the country unspoiled by these natural calamities,” Enerio said.

He added, “That the likes of Boracay, one of the best beaches of the world, is still the same magnificent destination worthy of an enjoyable visit. That even if it (Boracay) was hit by super typhoon Haiyan, it has bounced back right away, prospered and thrived as ever before.”

The wealth of knowledge and experience that Weaber and Schulz brought to the people they met with in the Philippines was immeasurable.

Enerio said, “The very presence of Mr. Weaber and Ms. Schulz of the NOCVB was very inspiring for us. The wealth of experience and knowledge handed down to us by the NOCVB was invaluable to the Philippines.”

Weaber said during the meetings they would share the success stories from New Orleans and people would burst into applause.

The entire trip, he added, “was one of the most amazing, beautiful experiences of my career.”

After Weaber and Schulz left, the Philippines put into practice what they learned, launching a worldwide campaign of #PH thank you.

“This campaign secured a positive media coverage in broadcast, print and online media,” Enerio said. “It was able to communicate good news about the Philippines to the world and to all audiences.”

Weaber said they still write back and forth at least twice a week. “We all created a wonderful relationship,” he added.

How Events and Venues Are Lending a Helping Hand In Times of Need
Cancelled trade shows and meetings are the harsh reality for convention centers across the country right now, but that hasn’t stopped many venues from turning their…
How Anaheim, Georgia Expo and Sahara Las Vegas Are Lending Helping Hands
In many ways, the COVID-19 pandemic has brought out the best in humanity, including those in the events industry. Over the past several weeks, more and more destinations,…
Lending a Helping Hand is the Heart and Soul of AFR Furniture Rental
Charity is an obligation, not an option, according to Jerry Hellmann, co-CEO of AFR Furniture Rental, a national furniture rental company that provides furnishings for homes…
International Housewares Association and Fern Expo Lend a Hand to Help Hurricane Florence Victims
Never say the trade show industry isn’t comprised of plenty of generous, kind-hearted people who are ready to lend a hand to those in need, especially in the face of natural…
Atlanta CVB Launches Celebrity Video Generating Super Bowl Buzz
NFL quarterbacks Tom Brady and Jared Goff will go head to head at Mercedes-Benz Stadium in Atlanta this Sunday, Feb. 3, for Super Bowl LII. Yet the Atlanta CVB is drawing on…
How One CVB Is Helping Meeting Professionals by Leading With Empathy-Driven Communications
With travel slowed nearly to a halt around the world, this isn’t an easy time for anyone, let alone destination management organizations. While there is a silver lining to…