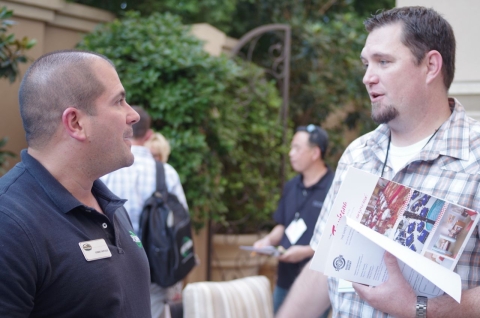 You know you are giving your event attendees the type of content they want when no one is in line for the open bar at a meet-and-greet, but instead all are busy clamoring for information. That’s exactly what happened last week in Las Vegas at the very first SHOT (The Shooting, Hunting, Outdoor Trade) Show Exhibitor Academy.

Just more than 100 attendees representing SHOT Show exhibiting companies arrived in Las Vegas to spend two days learning how to get more out of their presence at the event, which is owned by the National Shooting Sports Foundation.

“The exhibitor academy was something that ConvExx (show’s management company) mentioned in their presentation to us last year. That kind of creative, value-added experiential exhibitor education makes our customers more successful in the long run, and that helps make for a stronger show,” said Chris Dolnack, senior vice-president and CMO of NSSF.

Companies in attendance were a mix of new and long-time exhibitors, startups and industry stalwarts, small 10x10 exhibitors, and exhibitors with a footprint more than 3,000 square feet.

One long-time exhibitor, Ten-X Ammunition, Inc., a husband-and-wife team, said they thought the Academy was important enough to attend, even though they were celebrating their 25th wedding anniversary during the event.

Steve Sanetti, president and CEO of NSSF said, “The SHOT Show Exhibiter Academy was an astoundingly comprehensive resource for all exhibitors, whether they are first-timers or old-timers. The array of topics covered and helpful hints to make each exhibit a must-see event for all attendees was incredible.”

Some of the topics covered in the Academy’s sessions included social media, working with the media, tips on building a booth, navigating the exhibitor resource center, and budgeting. Attendees also had the opportunity to sit down one-on-one with key SHOT Show personnel to get answers to their specific questions.

There was an openness and transparency throughout the entire event. SHOT Show organizers did not shy away from any tough questions. During the Academy kick-off, Dolnack told attendees, “Tell us what you think. We’re not hiding.”

One attendee said he appreciated the fact that all members of the SHOT Show team were introduced during the kick-off, so that he could now put a face to the name of the people he had been dealing with, whether they were NSSF employees or ConvExx or Freeman representatives. “They even included names, photos and contacts of everyone in the information they handed out to us.”

Was the event a success? Dolnack thinks so. “Our first SHOT Show Exhibitor Academy was all that we hoped for and, based on feedback, provided information that will benefit exhibitors six months from now at the SHOT Show,” he said.

Dolnack added, “We were very pleased that 97 percent of the attendees said that they would recommend SHOT Show Exhibitor Academy to other exhibitors and that the experience was worth their time.”

Given that satisfaction rating it makes you wonder, why aren’t more shows taking advantage of this type of relationship building with their exhibitors?

Editor’s Note: Traci Browne was one of the presenters at this year’s SHOT Show Exhibitor Academy