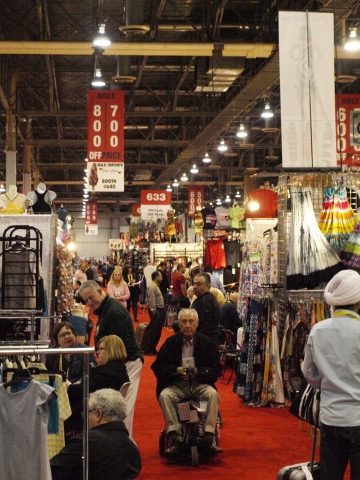 Even though some fashion trade shows appear to be experiencing slight revivals in participation this year, the event devoted to bargain apparel remains ahead of that pack.

Enter the OFFPRICE Show, the only trade show in the U.S. dedicated to discount fashion, which has been a booming segment since the economic downturn took hold a few years ago.

Although the show has benefited from a poor economic climate, OFFPRICE will always attract a strong following if the “new normals” in consumer spending are any indication, said Steve Krogulski, CEO of Tarsus Expositions USA.

“Our segment did well when the economy wasn’t doing well, but it’s doing well now because people are buying smarter, and everyone’s looking for value …it’s a mindset now,” Krogulski said.

He added, “That’s the reason OFFPRICE is always going to be there because it’s a channel that helps move excess goods in the market and we’ve become a valuable source for retailers to find those goods.”

Besides participation and size, the event also experienced growth in its newer product categories, including accessories and footwear, Krogulski said. Plans are to continue adding more categories in the effort to make OFFPRICE a one-stop-shop for discount-minded retailers, he added.

But the newest addition to the showfloor was The Connection, a designated lounge and networking area offering free Wi-Fi, as well as educational sessions that addressed digitally oriented topics, including social media, e-commerce and how to harness the Internet.

As an extension of the show’s deeper foray into social media, the intention is to grow The Connection and its offerings going forward, Krogulski said.

She added, “We had a lot of positive feedback from first-time customers and clients, we made deals with three retail chain stores and we were able to negotiate private labels for new clients. In addition, we had the opportunity to meet customers from around the world and hopefully do business with them in the near future. The show was such a success that we believe our sales will be even better at the August show.”

“It’s always a good show,” Ferraro said. “I’m finding everything I need and things are in clear sections. We always try to mix in closeouts with our name brands, so it’s a good place to find different vendors and products.”

OFFPRICE will return Aug. 19-22 to the Sands Expo Convention Center.

Internet Retailer Conference & Exhibition Continues Growth Streak in Chicago
Just halfway through the first day of Emerald Expositions’ Internet Retailer Conference & Exhibition at Chicago’s McCormick Place, the Digital River booth…
OFFPRICE Show Scores Record Showfloor Size, Most Attendees in Four Years
Neon is a must-have color for spring, according to the buzz on the showfloor of OFFPRICE Show, the bargain apparel, accessories and footwear show that took place Feb. 17-20…
CEIR Index Report: Trade Show Industry Growth Streak Continues for 12th Consecutive Quarter
The Center for Exhibition Industry Research’s latest Index Report for the second quarter was just released, and the good news is for the 12th consecutive quarter, the…
SMG Continues Win Streak with Two New Venue Contracts
SMG has two new feathers in its cap, scoring venue management contracts for Miami’s James L. Knight Center and South Dakota-based Sioux Falls Convention Center. Both…
Cosmoprof Asia Sees Increases in Attendees, Exhibitors and Showfloor Size
The recent Cosmoprof Asia grew in several different areas, including attendance, showfloor size and number of exhibitors, when it ran Nov. 9-11 at the Hong Kong Convention…
OFFPRICE Show Holds Its Own in Las Vegas
Dedicated to bargain apparel, accessories and footwear, OFFPRICE Show may have gained its momentum during the economic downtown, but it continues to have a strong presence…