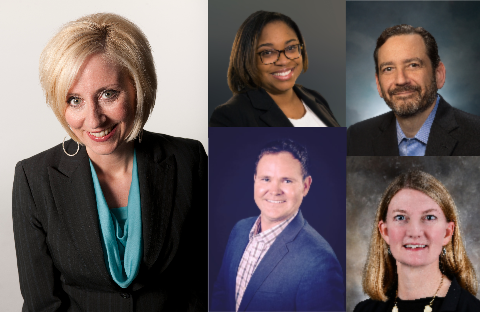 November is only just getting started, but it’s already a busy month for new hires and promotions. Check out the latest people moves in the trade show industry.

Alli Johnson is now vice president of fashion events for Clarion Events’ semi-annual Womenswear In Nevada Show (WWIN) and ADORN, a new fashion accessories and jewelry show launching in August 2020. She was previously with UBM/Informa, serving as show director for POOLTRADESHOW and MAGIC Mens.

Visit Milwaukee has named Peggy Williams-Smith as its new president and CEO, effective Nov. 18. She previously served as senior vice president of Marcus Hotels & Resorts and will replace former CEO Paul Upchurch, who is leaving to pursue new opportunities.

Mike Fiber, previously chief operating officer of Chicago-based business event management firm PRA, has been promoted to CEO. He will replace Tony Lorenz, who has stepped down from the role.

Del Baker-Robertson has joined the Destinations International team as senior director of strategic alliances, a newly created position. He was previously vice president of strategic partnerships with the Electronic Transactions Association.

Jessica Morgan is the new tourism development director for Louisville Tourism. A native of Louisville, she has also worked at CVBs in Lee County and Bradenton (both in Florida).

People News: Core-apps, L.A. Convention Center, Comexposium and More Make Hires, Promotions
In the past, companies typically slowed down with their hiring and other employee changes throughout the summer months, but not anymore. Now, it’s full steam ahead all-year…
People News: Aventri, Informa, Orange County Convention Center and More
The new year already appears to be a busy one for the trade show industry, with many new hires and promotion announcements this month. Check out the latest. Venue News…
People News: Freeman, PCMA, Clarion UX and More Make Hires
Companies within the events and tourism world continued with a flurry of hires in March, showing the economy and outlook for the industry looks strong. Freeman has named a…
October People News: New Hires and Promotions at GES, Freeman, Spectra and More
This fall has been a busy one for companies in the meetings and trade show business. Take a look. GES announced two major leadership changes this week. Jay Alitzer, who…
People News: Events Industry Council, Caesars, ProExhibits and More Make Hires
April showers brought May new hires to many companies in the trade show and destination marketing world. Here’s all the news you need to know. Big news for the Events…
People News: Ungerboeck, CadmiumCD, New Orleans, Houston and Phoenix All Make Hires
Hiring and promoting was fast and furious during the past month, with several trade show companies growing their company rosters. Ungerboeck, an event and venue management…