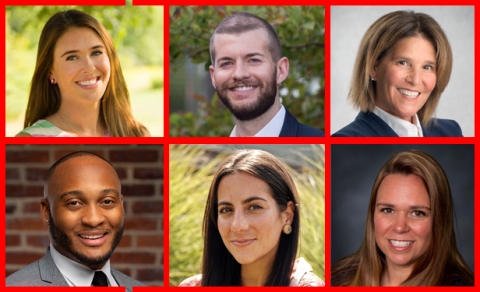 More new hires and promotions seem to be occurring at record pace as the trade show and destination marketing industries continue to forge ahead. Check out who’s moving in and up at event-related organizations throughout the U.S. and across the globe.

Jennifer Carr has been promoted to vice president, trade show and event operations, in which she will be responsible for service contractor relationships, graphics and show décor, and assisting with sales and marketing. Carr has been with ConvExx since 2002, working in the operations department.

Thirteen-year employees Sheldon Kaye and Cassandra Stock were appointed vice president, events and technology management, and vice president, attendee services and registration, respectively. Kaye is responsible for handling the technology suite for the company, in addition to show and event management, while Stock’s responsibilities include working with the company’s registration contractor and guiding the customer service team alongside newly appointed customer service manager, Melanie Mathis.

Four-year employee Chris Briare has been promoted to social media manager and will continue to manage the company’s websites and graphics.

Bringing more than 15 years of event strategy experience in event technology, large events and corporate meetings segments, Megan Murphy joins the company in the U.S. as vice president of account management. She most recently served as vice president of digital sales and partnerships at the Freeman Company, and prior to that had a long tenure at American Express Meetings & Events in various roles, including account management and leadership.

Twenty-year meetings and events industry veteran Tim Bull has been appointed Bizzabo’s first vice president of sales in the EMEA, where he is launching the company’s London operations and overseeing expansion efforts across Europe. Based in the U.K. and boasting extensive experience in SaaS technology, Bull previously served as the managing director of sales, EMEA & APAC at Aventri and director of sales at Lanyon/Cvent.

As the new vice president of global events, Devin Cleary leads the organization’s event strategy and will build out the industry’s first Center of Excellence. With more than 16 years of experience leading the creation and active management of diverse experiential marketing programs for B2B, nonprofit and consumer markets, Clearly most recently served as vice president of experiential marketing at PTC. Based in the U.S., he previously held roles as an events experience strategist at HubSpot and senior director of corporate events at the American Red Cross.

Sarah North joins Cleary’s team as director of event experiences. Based in the U.S., she has held event leadership roles at Ellucian, Viacom, Live Nation, Shire and PTC.

Choose Chicago has welcomed Eric Kincaid as senior director of convention sales, responsible for handling the entire large-scale convention market out of the mid-Atlantic region. Based in Washington D.C., he will represent and sell Chicago’s convention package with a primary focus on conventions meeting at McCormick Place.

Kincaid joins the CVB from Destination D.C. (DDC), where he served as national account director of citywide sales, and prior to that, as national sales manager. Prior to his almost seven years at DDC, he spent more than ten years at Marriott International in several key sales positions both on and above property.

Caitlyn Correia has been promoted to president of BlueHive Group and BlueHive Exhibits, responsible for overseeing the daily operations of the entire BlueHive Group organization and affiliate brands including Continental Woodcraft, Trigon Creative and Lime I&D Services. As the third generation of a professional trade show family, Correia is well-prepared to take the company’s helm after joining BlueHive in 2013 and holding positions in almost every department of the company, from the exhibits shop to accounting, account management and client services and marketing.

Previous BlueHive Group President and CEO Paul Hanlon will continue in his role as CEO for the companies.

Additionally, BlueHive affiliate brand Lime I&D appointed Rachel Purgiel as director of labor operations for both its Worcester headquarters and Portsmouth, NH satellite office. Besides developing and maintaining labor provider partnerships nationwide and assisting with Lime’s invoicing, she will also be actively representing Lime in sales presentations and assisting in the completion of labor service RFPs. She previously worked with Boston-based trade show management firm Nth Degree as a customer service representative and then Boston city representative manager.

In her new role, Trombetta will be responsible for the conceptualization and implementation of parties and networking events, fashion shows, giveaways, speakers and educational programs and at-market installations. Additionally, she will participate in setting the annual Apparel marketing strategy, collaborate on the annual visual campaign, advise on trends in trade show experiences and events, as well as analyze metrics for all initiatives to measure effectiveness.

She rejoins IMC’s Apparel team with five previous years of experience as a fashion manager and as a marketing coordinator for its Gift and Home division.

Based in Toronto, Holmen most recently served as director of strategic alliances at Meeting Professionals International (MPI), where she worked with their global supplier accounts and strategic alliance partners to enhance MPI’s global presence. Highly experienced in selling individual hotel properties and entire destinations in the global travel market, she also worked for Destination Toronto as director of citywide sales and event engagement from 2006-2017.

Re-hired as an executive recruiter to assist with director and C-level searches, Rachel Tomlin previously worked for SearchWide Global in 2018 as a researcher and recruiter. Based in Charlotte, NC, she brings a professional background in hospitality, hotel account sales and corporate recruiting to her new role.

Based in Dallas/Fort Worth, Cambria Jones recently joined the firm as marketing manager, responsible for leading the organization’s planning, development and implementation of marketing programs. Before joining SearchWide Global, she spent six years as the marketing lead for two Texas-based destination marketing organizations.

In the newly created role of business development manager for the PWCVB, Elizabeth Buckley will focus on uncovering new meetings and conventions sales opportunities. With more than 20 years of experience engaging industry partners and producing events, she previously spent six years with the organization in the early 2000s as a director of membership and then as director of national accounts handling the mid-Atlantic market.

Joanna Arrighie joins the RICC as senior sales manager after spending 15 years at the Providence Marriott Downtown, where she most recently served as director of sales and marketing. She also brings a background in catering, business travel and group sales to her new role.

Veronica Van Jura has been appointed senior marketing manager of the RICC and Dunkin’ Donuts Center. Bringing eight years of experience in marketing and strategic branding to her new role, she most recently was the marketing lead at the DCU Center Arena & Convention Center in Worcester, Mass. for four years.

Thirty-year hospitality veteran Donna Wing has assumed the role of catering sales manager for the RICC. She previously served as director of convention and group sales for Twin River Casino, and prior to that, held a variety of management positions within the food and beverage department at Foxwoods Resort Casino.