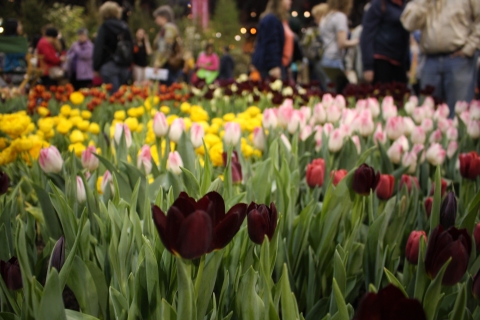 One hundred and eighty-seven years hardly is a nice round number, so the Pennsylvania Flower Show (founded in 1829) is sharing the stage with the relative youngster National Park Service, celebrating its sweet 100.

“The Pennsylvania Horticultural Society is honored that the Philadelphia Flower Show has been chosen by the National Park Service as a centennial event marking this amazing milestone,” said Sam Lemheney, PHS Chief of Shows & Events.

The centennial celebrations formed this year's theme "Explore America" at the show, which ran March 5-13 at the Pennsylvania Convention Center, and highlighted this nation's parks and historic sites.

“The National Park Service and PHS share a commitment to introduce new generations to the beauty of nature, to be good stewards of our environment, to honor the contributions of individuals to our history, and to build vibrant communities,” said Cynthia MacLeod, superintendent of Independence National Historical Park.

Considered one of America's best ideas, "nobody else had national parks until America created the Service – people used to go have picnics in cemeteries,” said Beth MacMillan at the Hamilton Horticourt Info Booth.

Complementing this theme, the nation's largest flower show had exhibits showcasing organic and sustainable practices, countless plant varieties, garden and design concepts and vendors including Oasis Floral Products, which according to Kelly Mace, aims to "make more high-end floral products available to the consumer, especially garden clubs, who might not be able to find everything locally."

Ruth Ong drove in from New York City and agreed with the judges who awarded "Best of Show: Floral" to Robertson's Flowers and Events.

The vibrant red arrangement "defied gravity" and following the Explore America theme, the "best part was that it was inspired by Arches [National Park], but didn't try to mimic it. Instead it was kept very abstract and definitely beautiful,” Ong said.

The Pennsylvania Horticultural Society's Flower Show wrapped up March 13, but you know that the "Big 188" is right around the corner. Word around the Horticourt is a "Holland" spotlight theme is planned for next year.

IAEE Women’s Leadership Forum Draws Sold-out Crowd in D.C.
Last week’s IAEE Women's Leadership Forum, held at the InterContinental Hotel in Washington, D.C., drew a sold-out crowd of more than 220 attendees to hear several dynamic…
UFI’s 86th Annual Congress Draws Record Crowd in Thailand
UFI, the Global Association of the Exhibition Industry, is reaching more industry professionals around the world than ever before. On Nov. 6, UFI members from more than 50…
LA Auto Show Hits ‘Refresh’ Button with Huge Success
A few years ago, the 110-year-old Los Angeles Auto Show was at a crossroads: it could either keep having the same show it had been holding for a long, long time – or, in a…
Record-breaking Crowd Celebrates Fastest-growing Shows at the 2014 TSNN Awards in Cleveland
The National Society of Genetic Counselors Annual Education Conference was named the overall fastest-growing show in net square footage and UBM's Medical Design &…
HKTDC’s Electronics Show Draws 4,100 Exhibitors
Earlier this week, the Hong Kong Trade Development Council (HKTDC) held two co-located electronics trade shows at the Hong Kong Convention and Exhibition Centre (HKCEC) with…
UBM’s Digital Signage Show Draws 500 Exhibitors
One of UBM Asia’s joint venture companies in China, Shanghai UBM Sinoexpo, reportedly attracted some 13,200 trade visitors from over 50 countries and regions to the 2014…