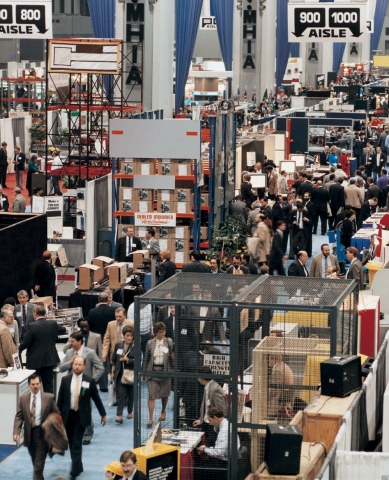 The first National Material Handling Show launched by the Materials Handling Industry (MHI) in 1948 was a result of new methods used to transport goods during World War II. That first show in Cleveland had 60,000 net square feet and approximately 3,000 attendees.

Throughout the history of MHI, the annual expos have provided attendees with the latest developments in managing the flow of materials and products through the supply chain from manufacturing and distribution to
consumption and disposal.

The ProMat brand evolved from the slogan ‘Productivity through Material Handling,’ and became the official show name in 1985 at Chicago’s McCormick Place. ProMat is now held every odd-numbered year in Chicago.

For the first time in 2017, ProMat will have exhibits in both the South and North Halls of McCormick Place. Over 850 exhibitors will fill the two halls, totaling over 370,000 net square feet, representing all segments of the industry, from traditional manual equipment to computerized, automated .

Prior to launching MODEX, in the alternate years of ProMat MHI held a show called the North American Material Handling Show (often referred to as the NA Show). It launched in Detroit in 1992 and moved to Cleveland in 2004 where it stayed until being retired in 2012.

Because the industry was becoming more global MHI recognized the need to expand the focus to a worldwide audience, so after two years of research MODEX launched in 2012. It is now held during even-numbered years in Atlanta’s Georgia World Congress Center.

“Material handling has been a huge enabler of productivity in both manufacturing as well as distribution,” said Carbott. “Yet some things stay the same which is evidenced by some of the original exhibitors and basic technology that was on display back in 1948 as well.” Two companies – Columbus McKinnon and Yale & Hyster – have been exhibitors for more than 50 years.

Over 28,000 attendees gathered at MODEX this past April, exploring solutions featured by more than 800 exhibitors in 250,000 net square feet. It was recognized as one of the Top 25 Fastest-Growing Shows by TSNN, and true to MODEX’s global focus the participants came from over 100 countries and six continents.

As a part of this year’s MODEX, Student Days introduced over 300 high school and university students and educators to the world of material handling, supply chain and logistics through hands-on learning and a
guided tour of the show floor where they had the ability to see state-of-the-art equipment and network with industry professionals.

Over the years, MHI shows have experienced their share of adventures. At one show in Detroit, Michael Moore showed up unannounced to film for a documentary on General Motors. He was denied entry and was not happy, according to Carbott.

“At one of the early ProMat shows, an exhibitor hired an imitation Beatles Band with an Ed Sullivan impersonator,” said Carbott. “They set up on the top level of a 40-foot-high rack assembly and proceeded to sing at a decibel level of about 130. For four minutes, the show was shut down because nobody could talk or hear. We had to threaten to cut off electricity to the booth because the band was not interested in playing soft. They agreed to one more song and would then leave. That last song was ‘Revolution’ — not funny then, but incredibly funny now.”

MHI Hosts Record-Breaking MODEX 2022 Supply Chain Event at Georgia World Congress Center
MHI, the international trade association representing the material handling, logistics and supply chain industry, brought its largest MODEX event ever to Atlanta’s Georgia…
EventPower Evolves With the Times
Hewlett Packard planned to send 2,000 attendees to Nashville for an event in May. There were 270 presentations ready to go, featuring a combined 700 speakers. Rather than let…
Engaging with Technology at Expo! Expo!
The IAEE Expo! Expo! Annual Meeting and Exhibition 2017 drew some great technology features to the show. This year’s event, held Nov. 28–30 at the Henry B. Gonzalez…
International Vision Expo East Continues to Evolve
By Elizabeth Johnson   International Vision Expo East, held March 31-April 2 at the Jacob J. Javits Convention Center in New York City, added even more content to an…
New Tech Tools Help Planners Along Each Stage of an Event
With virtual elements taking an increasingly prominent role in the events industry, new digital technologies continue to emerge to aid planners with the various components…
How to Design an Engaging Showfloor with Event Technology
You just got your approved layout for your next event…now what? Looking at a sea of 10-by-10-foot booths can be daunting for any show manager. How are you supposed to know…