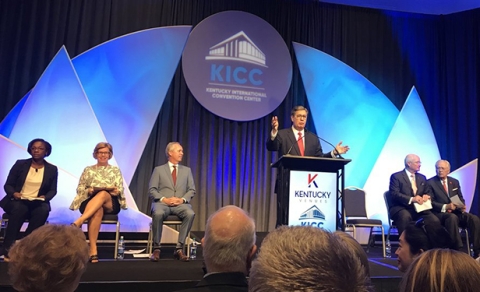 The Kentucky International Convention Center (KICC) opened its doors on Aug. 6 after a two-year renovation and expansion. The new build has increased KICC’s contiguous exhibit space by more than a third.

State and local government officials, along with KICC facility officials and staff, welcomed clients, local stakeholders and media to an open house that showcased the new facility and its capacity for events.

The program included comments from:

All parties involved took well-justified pride in the fact that the $207 million project was completed on time and within budget.

“We have a wonderful space and we will continue to manage it, update it, take care of it, provide jobs and be part of the economic engine of our community,” Beck said.

The numbers uphold the community’s optimism. Eighty-four convention groups are already booked at the KICC, which are estimated to have an economic impact of $246 million. Louisville Tourism is also projecting a 25-30 percent growth in tourism over the next few months.

Louisville hosts five of the country’s largest trade shows, according to TSNN, which will be the second group to use the new space when it hosts its 2018 Awards Ceremony Aug. 10-12.

“We are about to launch a new era for downtown Louisville,” Parkinson said. “This is the best convention center in the United States.”

The city of Louisville features two large convention venues, an arena and 20,000 hotel rooms in the metro area. The city’s growing culinary scene, 3000 new hotel rooms and expansions at many of its iconic attractions have brought it to the forefront of attention from both convention and leisure markets.

In April 2017, the city officially appended the “Bourbon District” moniker to a several-block radius which is now home to ten distilleries. On Aug. 30, the Frazier History Museum will unveil its new exhibits and bourbon trail concierge service, officially becoming the starting point for the Kentucky Bourbon Trail.