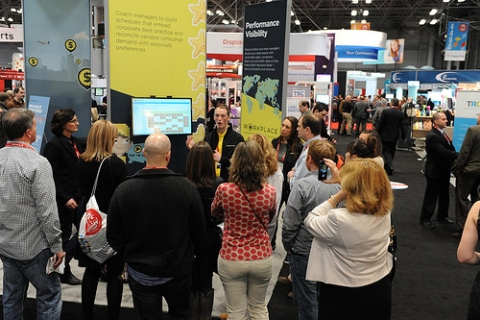 “We are incredibly fortunate to be in an industry that is changing on a daily basis,” said Susan Newman, NRF’s senior vice president of conferences.

Driving that change is technology and all the ways that consumers are buying products, whether it be in-store, online or on their mobile phone.

“Retailers constantly are needing to figure out what’s next,” Newman said. “Our show is the place to go.”

One of the fastest-growing aspects of the showfloor is the mobile component, she added. “Mobile is obviously huge. It’s the biggest area of growth.”

The show featured areas, such as the Innovation Lab, at which new products were brought in that would create some ‘buzz factor’, Newman said. One of those products included a gum that came out of China that when chewed would make someone’s entire body smell like a certain flavor.

Also to bring added excitement to the showfloor, there was a lot of education offered not only in exhibitors’ booths, but also on the main NRF Expo stage, where there were 800 seats and standing-room only crowds for hot topics, Newman said.

Of the 30,000 attendees from 86 countries, the biggest contingent, 1,652, was from Brazil. “They are hugely loyal to our show and very interested in new technology,” Newman said.  Canada had the second-biggest group there with 1,124 attendees.

Other international delegations attended from France, Japan and Mexico, to name a few.

One of the surest signs that exhibitors were happy with this year’s show? “We’re 94 percent rebooked for next year,” Newman said.

Here are some of the fun stats put out by NRF after the show: