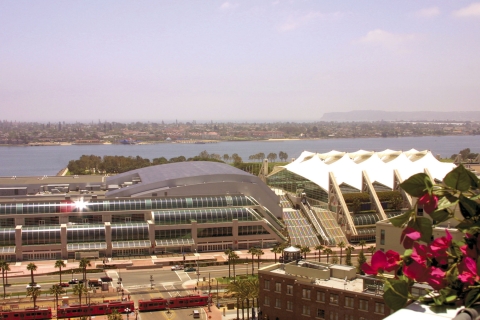 “Our clients, when interviewed about the proposed Chargers site, rejected a non-contiguous expansion as not meeting their needs and therefore, not viable to accomplish the goals of retaining current customers who are outgrowing the current facility and attracting those who have never been able to fit in the current facility,” said Carol Wallace, president and CEO of the SDCCC.

She added that the current proposal to expand the San Diego CC is the culmination of a multi-year planning process that involved citizens, organizations and elected officials in the region.

“We believe this is the right project to expand the convention center and build on our 23 years of success driving visitors to our region and tax revenues to the City of San Diego and Port of San Diego, which provides funding for parks, police, fire and libraries in every community,” Wallace said.

San Diego Chargers officials, however, felt their new plan, which would add 250,000 sq. ft. of convention center space to the city, was a better fit for downtown San Diego than the SDCCC’s proposed expansion.

“That project consists of the so-called ‘Big Box on the Water’ – a new building between the existing convention center and the ocean that will block public access and views to the water,” Chargers Special Counsel Mark Fabiani said.

He added, “After working with our architectural firm, Populous, and one of the world’s most visionary development firms, Colony Capital LLC, we concluded that there is a more cost-effective and environmentally-sensitive way to expand the convention center as part of a multi-use stadium in the East Village. And that’s the concept we presented to the Coastal Commission.”

This isn’t the first time the plan has been proposed. In 2011, it was rejected by then-Mayor Jerry Sanders.

“We were told back in 2011 that the city did not have time to consider our alternative because the convention center expansion project – the Big Box on the Water – was very far along and that both the courts and the Coastal Commission would quickly approve the proposed expansion,” Fabiani said.

Meanwhile, he added, the SDCCC hasn’t had a hearing before the commission in the past two years.

Wallace countered that six different configurations previously were proposed for a joint-use, stadium-convention center and a task force found problems with all of them, including an active earthquake fault that ran through the middle of the proposed site.

“Additionally, it was determined that to be marketable the Tailgate site would require a minimum of 400,000 sq. ft. of exhibit space, as well as meeting space,” she added.

Wallace said the ultimate goal for the San Diego CC expansion was to be able attract shows that currently don’t fit in the venue, as well as more shows simultaneously and in order to do that the space needed to be contiguous.

“While we appreciate the Chargers effort to build a new stadium, we will continue our current efforts to secure the California Coastal Commissions support and work with all San Diegans to ensure the successful expansion of the San Diego Convention Center,” she added.