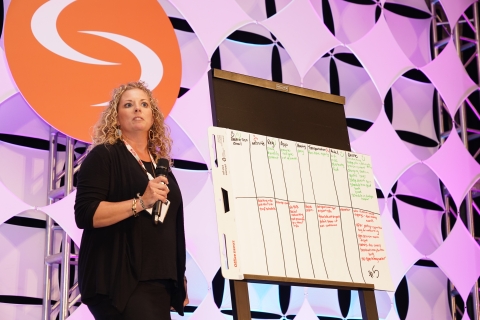 The trials and tribulations of launching a new show, successfully leveraging digital, mapping the attendee and exhibitor journey, new tech innovation and utilizing content marketing were just some of the hot-button topics discussed at the Society of Independent Show Organizers’ Leadership Conference, held Aug. 9-11 in Cleveland, Ohio.

David Audrain, SISO’s executive director, said there were about 174 people at the event, which was on par with last year.

"We are receiving very positive comments from our members on both the content and location of this year's SISO Leadership Conference,” Audrain said. “From the panel of experts on show launches, to the Innovation Battlefield presentations, attendees were able to walk away with valuable ideas."

After an opening night party at the Rock and Roll Hall of Fame, the conference kicked off the next morning at the Global Center for Health Innovation.

“Finally, SISO is here in Cleveland,” said Mark Leahy, general manager of the Huntington Convention Center of Cleveland and the health center. … “This is wonderful to have you here.”

The traditional round of introductions in which every person in the audience introduces themselves were done and the first session was led by Destination Cleveland’s Mike Burns, who discussed bringing the Republican National Convention to the city.

Burns said there were 50,000 visitors, adding, “You just can’t get that type of lift. He added that having the convention there “changed the entire narrative about Cleveland.”

“We take our launches very seriously,” McKay said. “As the owner, I am kind of like the (private equity) guy.”

Everett said some shows succeed, and others are more challenging. One of ExpoDevCo’s wins, she added, was the North Carolina Restaurant & Lodging Expo.

“Exhibitor/attendee satisfaction was very successful,” Everett said. Polito added that conducting research before launching a show was key. “You need to understand the risk tolerance right away,” he added.

Digital sales and marketing also was a topic at the conference, with panelists such as Informa Exhibitions’ Elizabeth George talking about how her company grew its digital sponsorship revenue 4.7 times over through targeted emails, mobile ads and online banners, to name a few.

“Digital holds us accountable, because we have to deliver the metrics,” George said.

The afternoon session was an interactive one in which all of the attendees were split up into groups and asked to map either the returning or new attendee or exhibitor journeys and how organizers could solve pain points along the way.

Informa’s Dana Teague told everyone in the beginning; “We really have to look at what our customers want.”

After a night out with live music at the local House of Blues, the next morning began with the annual SISO Innovation Battlefield, featuring five technology companies who vied to be named the top company through audience voting.

The first company up, GRIP, showed off what they called the “first artificial intelligence networking solution” that matched people based on keywords at events. Another company, insightXM, took on what it called “the very unsexy topic of data”, while third company, Stereobot, showed off 3-D, dynamic venues.

The fourth tech company was ISL, which created fan engagement experiences, such as a school bus that instead of windows had a virtual reality experience that made it seem like the kids were on Mars. The last tech company to present showed off a technology that worked through aa smartphone app and embedded digital media in sound waves.

After the audience vote, ISL ran away with bragging rights as ‘most innovative’.

The rest of the morning was packed with sessions that included John McGreary, senior vice president of Emerald Expositions, discussing ways to cut costs running a show. Some of his tips were – don’t carpet everything, ask decorator for referral programs, ask for free Wi-Fi, put conferences on the showfloor and don’t use plastic on name badges.

Content marketing is something every show needs to be paying attention to, and some of the key people from the Content Marketing Institute and Content Marketing World – Joe Pulizzi and Cathy McPhillips, as well as McGreary and Jennifer Holcomb, content director - Outdoor Retailer, were on hand to talk through what’s working for their properties.

McPhillips said that the company’s weekly Twitter Chat has been a big success. “Our community expects this,” she added. “It’s our weekly appointment with the community.”

Pulizzi said sometimes keeping up with new content is a challenge so something that they do us take the dates off of articles that were well received in the past and republish them.

The last session of the conference was a chat between Topalian and Agenda’s Aaron Levant, who talked about fulfilling a need in a sector by launching a small event that eventually grew over the years to a much larger show that was bought by Reed Exhibitions.

Levant said one of the keys to their success was “we were from the demographic they wanted to market to. It was very authentic.”

As far as what might be next, Levant said it was important to always think of “new, innovative event formats,” adding, “sometimes we do something very human and low-fi and not force a business result.”

Atlantic City Pulls Out All the Stops for 175 Attendees to SISO’s Executive Leadership Conference
Atlantic City rolled out the red carpet, and then some, for 175 attendees to the Society of Independent Show Organizers’ Executive Leadership Conference, held Aug. 11-13 at…
2015 SISO Leadership Conference Will Focus on Millennials, Climbing CEO Ladder, Building Attendance
The 2015 Society of Independent Show Organizers’ Leadership Conference will not only take a look at what the Millennials really want, but also what it takes to be a CEO and…
TSNN Awards Features Cleveland Cavaliers CEO Len Komoroski Keynote; Celebrity Chef Michael Symon-hosted Brunch
The 5th Annual TSNN Awards: Celebrating Trade Show Excellence will feature a bevy of well-known personalities, including CEO of the NBA Cleveland Cavaliers Franchise – Len…
Young Professionals, Multi-generations Discussed at SISO Conference, Joint Study with CEIR
Every workplace right now likely is experiencing a similar situation; there are not only one or two different generations working together, but there could be up to four, all…
A Sneak Peek at Hot-button Expo! Expo! Sessions
By Elizabeth Johnson The International Association of Exhibitions and Events (IAEE) will hold its annual Expo! Expo! Dec. 6-8 in Anaheim. IAEE has slated a full program of 70…
PCMA’s Education Conference Features Global Execs Talking U.K. Vote to Leave EU
At the 2016 Professional Convention Management Association’s Education Conference in St. Louis. Mo., the planning committee did some quick thinking after the U.K. voted to…