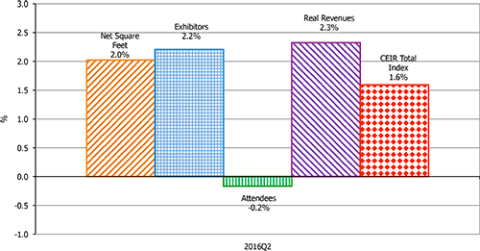 Still marking the 24th consecutive quarter of growth, the overall trade show industry’s upward trajectory has slowed down some during the second quarter of 2016.

He added, “As oil prices stabilize and consumer spending continues to remain the main driving force, by 2017 macroeconomic growth and subsequently the business exhibition industry will pick up the pace.”

The moderation in growth was attributable to a small decline in attendees. Even so, the industry has continued to outperform the macro economy for six quarters straight.

The strong year-on-year growth in Sporting Goods, Travel and Amusement, Food, and Transportation sectors more than offset the weakness in Raw Materials and Science and Education sectors.

All exhibition metrics in second quarter of this year, except attendees, posted moderate year-on-year gains of slightly more than 2 percent.

As was the case during 2015 and the first quarter of 2016, the strongest metric was real revenues (nominal revenues adjusted for inflation), which rose 2.3 percent.

It was followed by exhibitors, which increased by 2.2 percent. Net square feet increased 2 percent, whereas attendees posted a small decline of 0.2 percent, which was attributable to a substantial decline of 20.4% in Raw Materials and Science exhibition attendees.

For the first half of 2016, the Total Index rose 2 percent. Among 14 industry sectors, 10 sectors enjoyed year-on-year gains whereas four sectors suffered year-on-year declines.

Early this year, CEIR had a pessimistic outlook for Education and Government exhibitions as tight budgets and sluggish government employment were expected to shrink the potential attendee lists for exhibitions that catered to government services, especially military applications.

Education experienced a decline as expected. However, the Government sector has grown at a respectable pace so far this year.

After several down years, the expansion of Government exhibitions may reflect some pent-up demand by various government agencies to retool their organizations.

Stronger than expected gains in the Government sector provides an unexpected boost to the overall performance of the exhibition industry.

“We are seeing the direct impact the overall economy has on our industry and yet we are still quite positive about the near future outlook,” said CEIR President and CEO Brian Casey, CEM.

He added, “Clearly this data can be highly useful to many organizations as they look at strategic plans as well as reporting to their leadership. At CEIR Predict we will be taking an in-depth look at a number of these future trends and offer insights into effective solutions for industry executives to implement.”