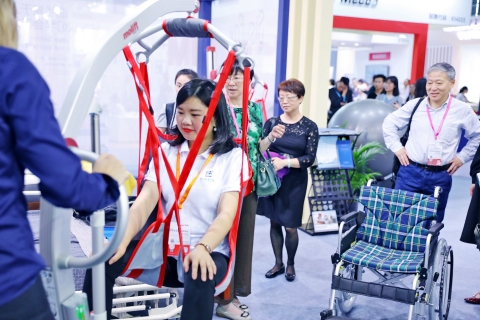 With China’s population aged more than 60 surpassing ¼ of a billion this year and set to add a further 10 million to its ranks every year through 2025, CHINA AID reflects the rising success of elderly care focused businesses in China and the quickly developing senior care market seeking to meet the surge in demand.

Produced by Shanghai Intex Exhibition Company and Tarsus Group, CHINA AID is the nation’s key gateway to its fast-expanding elderly care, mobility and rehabilitation markets, this year seeing growth of almost 20 percent in its show size, while increasing its exhibition attendance of predominantly focused senior care industry professionals by more than 10 percent to 47,890 visits.

The buzz of the showfloor made clear what became apparent through the feedback and interviews given by exhibitors and visitors alike, that the show was proving a resoundingly positive experience and further entrenching CHINA AID’s reputation as the place where business gets done.

“CHINA AID is an important platform for us to understand policies, seek cooperation and develop our sales,” Steigentec’s General Manager Sheng Hong explains.

He added, “During this year’s show, we introduced integrated hygiene equipment from Germany that provides strict protections to the elderly in renting clean products. On-site visitors to our stand came from all over the country. Government leaders from Civil Affairs were briefed on our products, which received their praises.”

The show saw high-level government and buyer delegations visiting from all over the country, notably headed up by Huang Shuxian, China’s National Minister of Civil Affairs (the Ministry responsible for elderly care services); Peng Chenlei, the Vice Mayor of Shanghai with a remit over the city’s elderly care services; Lϋ Shimin, the Vice Chairman of the influential China Disabled Persons’ Federation; and Zhu Qinhao, Director-General of Shanghai’s Civil Affairs Bureau; all of whom toured the show floor and commended the organizers for the show’s quality of exhibits and scope of exhibitors.

CHINA AID also welcomed Civil Affairs Bureau heads from more than 30 provincial jurisdictions and hundreds of senior municipal procurers from throughout the Yangtze River Delta region and beyond, many attending for the first time as cities across the country gear up to follow Shanghai’s leading example in preparing for China’s significant challenges in addressing the needs of its rapidly ageing population.

“Having participated in CHINA AID for many years, this year has seen the greatest variety of products we’re looking for yet,” Gong He, Director of Social Services at Hua Dong Hospital commented. “For instance, nursing bed products from Japan and Germany, as well as China, have given us more choice. This, therefore, provides us with a really convenient supply channel to advance the development of the senior care industry.”

Next year, CHINA AID 2020 will celebrate the show’s 20th anniversary from launch, commemorating this with its expansion into a third hall and in its already impressive conference offering.

Capitalizing on its momentum and now entrenched reputation for quality, this year’s show proved so popular that 57.4% of the show’s floor space was already rebooked during the show in anticipation for 2020.

A total of 101 exhibitors have already signed contracts for space for next year, with this figure rising by the day.

Tarsus Group Buys 70 Percent Stake in Touch China
Tarsus, the global B2B media group, has completed the acquisition of 70 percent of the Shenzhen Zhong Xin Cai Exhibition Company; owner and organizer of Touch China & 3D…
Pico Thailand’s Q1 Revenues Jump 48 Percent
Pico Thailand, the Thai-listed subsidiary of Pico Far East Holdings, has released its results for the quarter ended 31st January 2016. Revenues in the quarter were US$9.2…
GES Scores Nearly 35 Percent Q1 Revenue Jump
First quarter revenues saw a significant jump for GES of nearly 35 percent to $318 million compared with $236 million during the same period in 2016. “GES’ growth during the…
GES Scores 12.2 Percent Revenue Jump in Q2
GES’ second-quarter revenues were up 12.2 percent to $320.1 million from $285.4 million during the same period the year before. “GES delivered second-quarter results that…
Yarn Expo Autumn Edition in Shanghai Jumps 70 Percent in Space
The largest Yarn Expo Autumn is to be held Oct. 13-15 this year, with both the gross area and exhibitor number jumping to an all-time high. “We relocated this year’s…
U.S. Trade Show Industry Growth Jumps 2.9 Percent in Second Quarter
After a slow start to the year, the second quarter of 2017 in the U.S. trade show industry jumped into high gear, posting 2.9-percent overall growth, compared with the same…