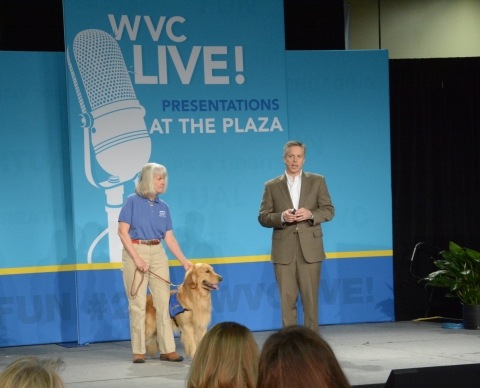 How do you drive traffic to the slow areas of a trade show and also engage potential attendees online? Western Veterinary Conference that took place Feb. 16-20 at Mandalay Bay Convention Center in Las Vegas solved that problem by streaming live action straight from the floor.

To entice attendees to come back to the floor after lunch, the show launched WVC Live!, 20-minute TED-style presentations that covered topics from Zappos corporate culture to the new products in animal care. For the first time, the talks were streamed online for non-attendees and also made available on the show's Web site.

"The idea of doing a live show initially was very scary," said Manolita Moore, COO at Western Veterinary Conference. "But even thought it was a logistically challenging, everyone worked together and made it a very successful venture. It was the highlight of this year's show."

Another major undertaking was a two-hour live webcast that showcased a specific medical procedure. Participants watched it live and online in real time and asked over 200 questions. "It pushed the boundaries for us and gave people who couldn't attend a taste of what they were missing during the conference," Moore said.

"We can't actually grow in terms of space for the next two years," Moore said. "But in 2016 we will gain additional 50,000 square feet here at Mandalay Bay and will be able to expand our programing and exhibit space."

Next year, she plans to continue WVC Live! and potentially expand the hybrid content offerings. With the addition of new space, she hopes to create a pavilion dedicated to technology in the veterinary industry.

After CE credits, new technology was one of the main reasons for attending the event. Dental radiography equipment was on the mind of Dr. Mark A. Peterson, who came to WVC to fulfill his CE credit requirements and also scope out potential future purchases for his practice.

"Things are going better now that the economy is recovering," he said. "We're starting to see people spend a little more on their pets but we're not hiring new staff yet."

Vicki Kolb, with exhibitor 3M Pet and Animal Care, said that their company had a very successful show. "Our team is very pleased with the number of people that stopped by and the kind of questions they were asking," she said. "It's a very enthusiastic group."

Western Veterinary Conference Takes on RFID to Track Attendee Behavior
In its 87th year, Western Veterinary Conference evolves with the times just like the dynamic industry it’s serving. For its annual event that took place Feb. 16-19 at…
New TED-Style Opening Keynote Format Set for FABTECH 2017
FABTECH 2017 is adding a new twist to its opening keynote presentation by embracing the popular TED Talks concept. Featuring short, inspirational talks given by industry…
UBM Adds New Advanced Manufacturing Show in Cleveland
Manufacturing has contributed $99.8 billion to Ohio's Gross Domestic Product and is the largest of the 20 sectors in the state's economy. Building on this…
Facebook Adds New Feature for Groups and Events
Social media isn’t just for sharing selfies or tweeting 140 characters anymore. We use it every day to stay connected to family and friends, read about current events, and…
International CES 2015 Expands into New Space, Adds Content
The Consumer Electronic Association’s 2015 International CES presented attendees from around the world, with the latest in autonomous cars, wearable technology, the Internet…
International Association of Exhibitions and Events Adds New Chapter in India
The International Association of Exhibitions and Events has added another new chapter in Asia, the IAEE India Chapter. The IAEE Board of Directors approved the creation of…