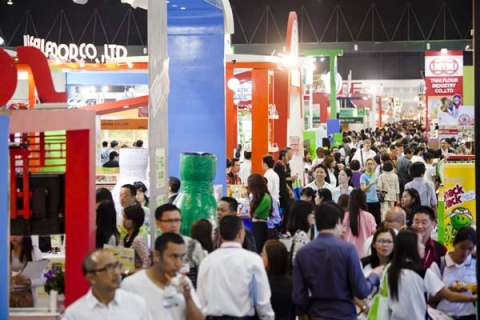 On the second day of the THAIFEX-World of Food Asia 2014 show, held May 21-25 in Bangkok at the IMPACT Convention & Exhibition Centre, the Royal Thai Armed Forces staged a coup d'état and overthrew the government after six months of political turmoil had impacted the country.

With martial law and a curfew declared nationwide, the show still stayed open for business and, against all odds, had a successful year.

International exhibitor participation jumped more than 20 percent, compared with last year’s show, with an overall increase of exhibitors to 10 percent and attendance was up 11 percent.

“The 10th anniversary of THAIFEX–World of Food Asia, marks a milestone. It is a bigger, better and ever more international edition,” said Michael Dreyer, vice president, Asia Pacific, Koelnmesse, which owns the show.

He added, “We believe the next decade will bring a more outstanding growth, not just in the scale of our show, but also in quantitative and qualitative volume. The 11 percent increase in our trade visitor attendance has proven our stance as a business-driven trade show, despite the  challenging political situation right from the start of our show until the closing  day.”

The show’s attendance also was a recordbreaker, with visitors taking in 16 different food and hospitality segments, as well as the World of Seafood, World of Coffee & Tea and World of FoodService.

Even with the political situation occurring outside the venue, exhibitors inside felt the show was a success.

Chris Ooi, head of sales and marketing from Everbest Soya Bean Products Sdn Bhd said, “We see an improvement in the quality of the visitors to our booth, with buyers coming from Southeast Asia and Europe. Sales leads and deals were made at THAIFEX-World of Food Asia and this, to us, is what made the show a success.”

Another country that had a major stake in the show was Japan, which was the show’s official partner country and brought 55 companies to the event.

Toshiharu Uki, director of the trade promotion department of JETRO Bangkok, said the Japanese companies had a lot of successful meetings with local and overseas buyers at the show.

“Overall, the ROI from THAIFEX-World of Food Asia has exceeded our expectations,” Uki said. “Next year, we hope to return with more companies.”

Since the coup, the curfew in Bangkok has been reduced from seven to four hours (Midnight – 4 a.m.) and lifted in some resort areas, such as Phuket, Hua Hin, Pattaya and Sumai, among others.

Nopparat Maythaveekulchai, president of Thailand Convention & Exhibition Bureau, reassured international stakeholders that, “Thailand’s famous warm hospitality and world-class MICE standards are as strong as ever. To ensure the safety of all visitors, security in Bangkok has been stepped up, and we reiterate our advice to business travellers to check travel routing before travelling within the Thai capital to avoid being inconvenienced.”

In Bangkok, businesses – including banks, petrol and gas stations, hotels, spas, restaurants, and entertainment venues – and MICE facilities such as convention and exhibition centre and hotels, continue to operate as normal until 11:00 p.m, and there is no military presence in popular MICE areas.