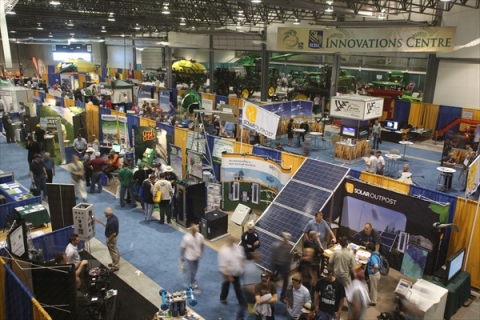 Culled from show management and data supplied to TSNN, the list represents the top 50 trade shows held last year in ranked by net square footage in Canada. The full list can be found at http://www.tsnn.com/datasite-cdn.

Snagging the No. 1 spot was Regina Exhibition Association’s Western Canada Farm Progress Show, with a whopping 1,189,783 net square foot showfloor. Despite overall negative economic trends, the showfloor grew in 2010 from 969,783 sq. ft. at the 2009 show.

Last year’s show, which serves the agricultural industry, was held in June at Evraz Place in Regina, Saskatchewan, and drew 715 exhibitors and more than 40,000 trade show professionals.

He added, “The economy in agriculture actually has been quite good, especially in Western Canada.” In fact, O’Connor said, there is a waiting list to get into the show, so they’d like to grow it even more in the future.

The No. 2-ranked show was dmg :: events’ biennial Global Petroleum Show that was held in Calgary’s Stampede Park in June last year and had a 540,070 net sq. ft. showfloor. Despite a drop in size from its 2008 show, it still attracted 1,430 exhibitors and nearly 14,000 attendees.

Dmg :: events also runs the Oil Sands Trade Show & Conference, which was ranked No. 18 on the list.

The No. 3rd- and No. 4th-ranked shows, the semiannual CGTA Toronto Gift Shows, both are run by the Canadian Gift & Tableware Association and were held at the International Centre in Toronto and the Toronto Congress Centre.

CGTA’s summer show last year spanned 429,136 net sq. ft and the winter show spanned 428,751. As a result of the prolonged economic downturn, the retail industry has suffered, but, according to Karen Bassels, vice president of CGTA Toronto Gift Shows, the events still are thriving.

“It’s always a pleasure that we have hit milestones in this difficult economy,” Bassels said. “Business is still happening for us.”

CGTA also runs the semiannual Alberta Gift Shows, which ranked Nos. 7 and 9 on TSNN’s Top 50 Canadian Trade Shows list, as well as the Montreal Gift Shows that ranked Nos. 16 and 17.

With exactly half the shows on the list coming to the city, Toronto hosted the most TSNN Top 50 Canadian Trade Shows by far, with Montreal coming in next, with seven shows, and Vancouver hosting six shows.

“We congratulate the show organizers and are thrilled Toronto has a role in their success,” said David Whitaker, Tourism Toronto president and CEO.

He added that the trade show business, though overlooked by some, has a significant impact on the overall economic health of the city.

“These … trade show visitors stay in our hotels, shop in our stores, eat in our restaurants and take our taxis” Whitaker said. “We’re proud of (Toronto’s) ranking on the list. It speaks to the importance of the trade show industry to our city.”

The busiest month last year on the TSNN Top 50 Canadian Trade Shows list also was one of the coldest – January – with eight shows, followed by one of the hottest – August – with seven shows.

November was the third busiest month, with six shows, and the quietest month last year for trade shows in Canada was July, with no shows at all.