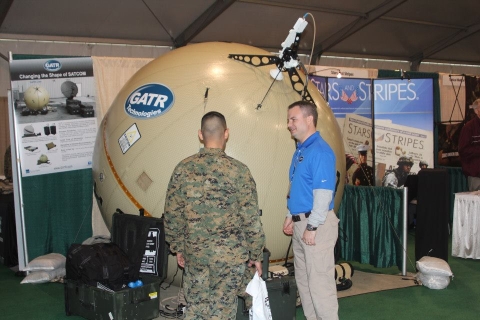 Military spending is running the gamut of so many issues right now that some conferences and shows already have canceled and others are seeing drops in exhibit floor spend. Fortunately, though, some still seem to be weathering the storm.

The Department of Defense is faced with not only the possible impact of nearly $500 billion in cuts over the next decade as part of the sequestration recently signed into law, but also compounding the problem is the absence of proper appropriation bills that has led to stop-gap funding called ‘Continuing Resolution’, as well as scrutiny after the General Services Administration’s meeting spend scandal last year.

In this climate, several military-related shows have canceled altogether, including the Military Health System Conference, which was meant to run Feb. 11-14, and the U.S. Air Trade and Technology show in Dayton, Ohio, with Wright-Patterson Air Force Base.

The announcement was made on the NDIA Web site: "Due to withdrawal of support by the Department of Defense and the Department of the Army, it has made it impossible for NDIA to conduct the 2013 Tactical Wheeled Vehicles conference in Monterey, Calif.”

Other shows, such as Nielsen Expositions’-produced Modern Day Marine, are far from being canceled, but have seen decreases in showfloor space being bought because of cutbacks and increased scrutiny.

“The scrutiny is higher than any time that I’ve ever seen since I’ve been in the business in the past few years,” said Charles Baisley, Modern Day Marine’s show director.

He added, “The government is not funding any active duty personnel to go to events. Right now, the whole industry is kind of struggling because of the GSA scandal and pressure on military budgets, it’s a double whammy.”

Last year’s event saw several exhibitor cancellations, resulting in a 15-percent drop of floor space, Baisley said, and this year’s event, on tap Sept. 24-26 at the Marine Corps Base in Quantico, Va., also is tracking down.

“With the increased scrutiny and sequestration now as well, companies need to cutback as much as possible, which means taking a look at their participation in conferences and events,” he added. “Everyone’s kind of skittish.”

The good news for Modern Day Marine at Quantico, and its companion events held at Camp Lejeune in North Carolina and Camp Pendleton in California, is all three are held on military bases, meaning no attendees have to pay to get there.

“We don’t ask the military to travel, we go to them,” Baisley said. “The travel burden is out of the equation.”

Another pressure on the shows, though, is the cycle of warfare itself, with troop deployments decreasing overseas, that means less supply and demand.

Baisley said the past several years for most military shows has been a boon time with conflicts in Iraq and Afghanistan, so he sees events going through decreases or out and out cancellations as part of a natural correction.

Even with the pressures, Modern Day Marine still typically draws 10,000 attendees and close to 500 exhibitors.

Other shows, such as the Navy League’s Sea-Air-Space Exposition, managed by Clarion Events North America, and Lodestar Group’s 7th Annual SpecOps Warfighter Expo WEST 2013 both are holding their own in a challenging environment.

Kevin Traver, who is staff vice president, Corporate Affairs & Membership for the Navy League of the United States, said the Sea-Air-Space Expo, which is scheduled April 8-10 at Gaylord National Resort & Convention Center in National Harbor, in Md., is expected to see increases this year.

“We are the good, cheap, local option for the Navy,” he added. The show serves the Navy, Coast Guard and Marines and doesn’t charge anything for government personnel to attend.

This year, the show also received the all-important “widely attended gathering approval” from the Department of the Navy’s Office of General Counsel that gave the event the ethical stamp of approval, allowing military personnel to attend and, for example, have a free lunch on the showfloor.

Traver said he and his team saw all the headwinds coming. “We were working out of fear,” he added. To stave off drops on the showfloor, the Navy League works with companies, as well as Freeman and Gaylord, to help drive down costs for attending and exhibiting.

“We’re a nonprofit, so we’re not looking to make money off these guys,” he added.

Jeanne Eury, co-founder and executive vice president of Marketing and Communications for Lodestar Group, said the SpecOps show, which also is held on a military base – the Army’s Joint Base Lewis-McChord – and doesn’t charge for admission, has steadily grown year-over-year in attendance and exhibitors, despite the challenges.

“Right now, we’re on pace to sell out quicker than we did last year,” she added of the upcoming show in May.

Eury said another reason the show has held its own is “we really make an effort to reach out to local businesses, so they don’t have to travel either.”

Even though both Eury's and Traver’s events are bucking any downward trends, they both still have their own pain points.

For Sea-Air-Space, the Navy has not given ‘conference approval’ for the show that’s just a few weeks out and, as a result, they haven’t been able to sign any contracts with the Navy for showfloor space.

“This process is completely new,” Traver said. “We’re all learning to do this together.”

Eury said one of the events her company managed, the Behavior Representation in Modeling and Simulation Conference, was canceled this week in San Antonio, Texas, because it wasn’t a DOD-sponsored event.

Baisley, Traver and Eury all said that despite the many hurdles, military shows still are relevant and people need to meet face-to-face or risk stalling in technological and other advancements.

“I think people will have to take a look at the events they attend, but they won’t be served by not being at these events at all,” Eury said.

Traver added, “Overall, I am optimistic about the future. The pendulum (right now) has swung way over, but I think it will right itself over the next couple of years."

Baisley agreed, adding, “No one really knows the impact of sequestration right now. The defense (industry) is unusual because it can’t market on T.V. or other mechanisms, so there will always be a need for interaction between the military and the defense industrial base."

TSNN Releases 2011 Top 50 Canadian Trade Shows List
Trade Show News Network is pleased to announce the release of the 2011 TSNN Top 50 Canadian Trade Shows list of rankings. Culled from show management and data supplied to…
New Report Outlines Future of Trade Shows, How to Prepare for Them
In a continuous effort to stay ahead of the curve, meeting industry leaders collaborated to fund a research project to predict, as well as plan for the future of, convention…
CEIR Report Indicates Attracting Attendees to Shows Strongest with Personal Contacts
It doesn’t come as a surprise that the No. 1 reason attendees decide to go to a specific show is through someone they know or by word of mouth, according to the Center…
Center for Exhibition Industry Research Report Indicates Trade Show Industry Activity Increased 2.7 Percent in 2011; 3.8 Percent in Q4 2011
In the latest Center for Exhibition Industry Research’s CEIR Index Report not only did the fourth quarter end with a 3.8-percent increase in overall trade show industry…
Trade Show News Network Unveils 2011 TSNN Top 250 Trade Shows in the U.S.
Tarsus Group’s Trade Show News Network (TSNN) is pleased to announce the release of the 2011 TSNN Top 250 Trade Shows in the United States. Culled from show management…
International Home + Housewares Experiences Increased Demand for Exhibit Space
If sold-out exhibit space at a trade show devoted to homegoods and housewares is any indication of an economy on the mend, then the recent International Home + Housewares…