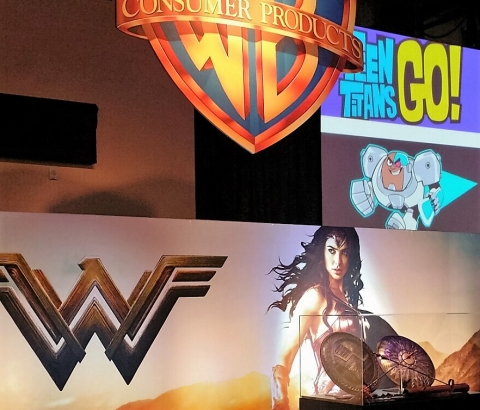 The event will comprise a trade show and a conference and will be co-ocated with IFF MAGIC Japan, a new joint venture between MAGIC and JFW-International Fashion Fair, Japan's longest running, bi-annual fashion business tradeshow. IFF MAGIC Japan 2017 will be held as the cornerstone of Japan Fashion Week.

“We are delighted to be working with our UBM Japan and MAGIC colleagues, as well as our partners at LIMA, to deliver this event for the licensing industry in Tokyo,” said Jessica Blue, Senior Vice President, Licensing, UBM.

She added, “Apparel, accessories and footwear represents the largest category for licensing both globally and in Japan, where 32 percent of all retail sales of licensed products derive from this category."

In addition to the apparel category, UBM will market the event to licensees and retailers in the following categories: toys and games, gifts, housewares, stationery, home décor, videogames, apps and publishing.

To further support Licensing Expo Japan, both UBM and LIMA have offices and experienced teams in Tokyo and are well-positioned to facilitate business connections between licensors, agents, licensees and retailers.

"LIMA is excited to partner with UBM for Licensing Expo Japan and provide a superior event for our licensing colleagues in this region,” said Charles Riotto, President, LIMA

He added, “According to our data, Japan is the world's third largest licensing market and more than 20 percent of our membership is based in Asia – we are committed to providing them with business, networking and educational opportunities designed to meet specific interests in licensing."

UBM's Licensing Group Launches Licensing Expo China in 2017
U.K.-based UBM will bring a licensing expo to Shanghai, China in 2017. Licensing Expo China will be open on 18-20 July at the National Exhibition and…
Licensing International Expo Unveils Matchmaking, Sports-themed Attendee Engagement in Las Vegas
Wonder Woman, with its feature film coming out next year, led the parade of characters and other licensable properties at the 36th annual Licensing International Expo that…
Dates Unveiled for New Texcare Asia and China Laundry Expo (TXCA & CLE) 2019 Show After Merger
In a development for China’s textile care market, it’s been announced that the upcoming edition of the new TXCA & CLE show, an international trade fair for textile…
LICENSING JAPAN Grew By 30 Percent
Japan is Asia’s largest market for merchandising licensed products accounting for 70 percent of the Asian market for licensed merchandise (source: Japan Kanto Bureau of…
TCEB Unveils Marketing Campaigns in Japan
The Thailand Convention & Exhibition Bureau (TCEB) introduced its two brand communication campaigns – Thailand Connect the World and Thailand’s MICE United II – to the…
IAEE Unveils 20 Under 30 Honorees to Be Recognized at Expo! Expo! 2017
The International Association of Exhibitions and Events has selected this year’s honorees of its 20 Under 30 recognition program, which gives young professional exhibitions…