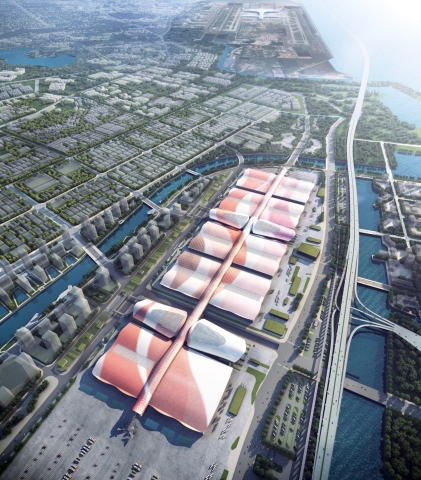 The Shenzhen World Exhibition & Convention Center is set to become one of the largest convention centers in the world. It also will be SMG’s new flagship venue in China’s growing trade show market.

“We are honored by our selection, which reflects our unique combination of resources, relationships and expertise in the industry,” said SMG President and CEO Wes Westley.

He added, “We look forward to operating a world-class facility in China’s most progressive international business center.”

Gregg Caren, SMG’s executive vice president Convention Centers and Business Development, said, "This facility is a milestone both due to its magnitude and its locale.  At roughly twice the size of our McCormick Place partner, Shenzhen world is also located in a hot market for Southeast China.  The city is literally the Silicon Valley of China, with easy access to Macao and Hong Kong."

SMG will work closely with China Merchants Shekou Holdings (CMSK) and OCT Group, the two Chinese companies that came together to win the bid from the Shenzhen Municipal Government to build the exhibition and convention center.

Sun Chengming, chairman of CMSK, said, “We are excited to work with SMG to build Shenzhen World Exhibition & Convention Center into a global venue benchmark.”

The new venue, which will be located near the Shenzhen International Airport, will anchor a new business and lifestyle district, featuring numerous hotel and commercial projects, including a retail and entertainment complex.

“Shenzhen World is a very significant project for the Shenzhen government, and we have every confidence in CMSK and OCT to build and operate the venue,” said Xu Chongguang, deputy secretary general of the Shenzhen municipality.

He added, “We hope that by leveraging the international experience and expertise of SMG, the venue can achieve a world-class standard with wide exposure on the global stage.”

The venue will be roughly twice the size of McCormick Place in Chicago, the largest exhibition and meeting facility in North America. SMG has managed McCormick Place since 2011.

“While we have entertained many inquiries from China in recent years, we were waiting for the right project and partner and believe we have found both in Shenzhen,” Westley said. “As we expand our global footprint, this agreement will propel our international growth strategy.”

The project is under construction, and the first phase is targeted for completion in the first quarter of 2019.

He added, “The general contractor is already working on site, and the venue operation company has already been established. We are now busy with pre-opening work.”

With facilities across the globe, SMG manages more than 15 million square feet of exhibition space and more than 1.5 million sports and entertainment seats.