Visionaries Paved the Way for CONEXPO-CON/AGG a Century Ago 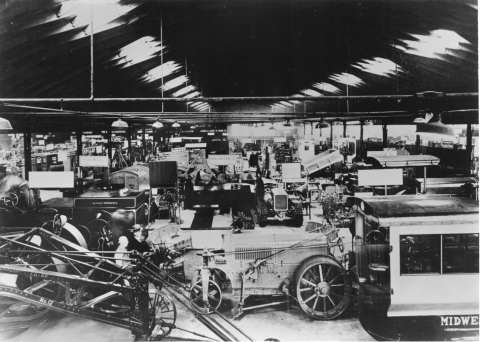 When the first CONEXPO was held in 1909 in Columbus, Ohio, the entire show (known then as the Road Show) covered 40,000 square feet — the size of some single exhibits at today’s CONEXPO-CON/AGG, the largest show for the construction, aggregates and ready-mixed concrete industries in the Western Hemisphere.

That first show was considered a “hazardous experiment” with 40 machinery manufacturers displaying devices that could do the work of 15 horse-drawn units — and besides, there were few paved roads outside of cities at the time.

But the Road Show, sponsored by forerunners of the Association of Equipment Manufacturers (AEM) and American Road and Transportation Builders Association (ARTBA), proved a success and grew as it was held in various cities every year or two up until 1940, when it was put on hold during World War II.

The first post-war show was held in 1948 in Chicago, and at the next show in 1957 a six-year cycle was established. In 1963, the show became known as the Construction Equipment Exposition and Road Show, while the name CONEXPO was introduced at the 1969 event and International was added in
1975.

Meanwhile, CON/AGG was also getting started in the early 1900s at annual conventions of the forerunners of the National Ready Mixed Concrete Association (NRMCA) and National Stone, Sand and Gravel Association (NSSGA). The first “exhibit by Manufacturers Division” was held in 1928 at the Book-Cadillac Hotel in Detroit.

That show was known as the “Biennial Show” because it continued to be held every two years in conjunction with the conventions. In 1970, it became The Concrete and Aggregates Show, then added International to the name in 1980.

The final standalone event for CONEXPO was held in 1993 and for CON/AGG in 1994. The new CONEXPO-CON/AGG debuted in 1996 at the Las Vegas Convention Center, and has been held there every three years ever since, taking over both the inside and outside of the LVCC.

The combined show allowed for a broader diversity of equipment, products and services, saving attendees and exhibitors time and money by participating in only one show. The most recent edition of CONEXPO-CON/AGG topped the TSNN Top 250 List in 2014, with more than 2.35 million net square feet of exhibits, over 2,100 exhibitors, and more than 129,000 attendees from all corners of the globe. The 2017 show is already on track to set records with 2.5 million net square feet.

What hasn’t changed over the years is the show’s ‘run by the industry’ focus where participants have a voice in planning the show, notes Sara Truesdale Mooney, show director and AEM vice president of exhibitions and business development.

“We actively seek out industry collaborations to bring members and meetings to CONEXPO-CON/AGG, to increase the networking and learning opportunities,” Mooney said. “Technology continues to rapidly evolve, with exciting possibilities for construction, so we are planning a new technology experience for attendees at the 2017 show, to complement what they’ll find on the show floor and in the education programs. We are
constantly looking to the future and that’s why our theme is ‘Imagine What’s Next’.”

A 75,000 square foot pavilion will be dedicated to presenting emerging construction innovations that are driving change and process improvement. Attendees will be able to explore how technology will transform the job site, especially as related to the bottom line to reduce downtime, increase efficiency, minimize waste, and enhance safety.

“Attendees will not only be able to ‘Imagine What’s Next’, but they will be able to experience it,” Mooney said.

Because of the three-year timeline between shows, communication is even more important. The show’s website has been revamped to better accommodate the increasing use of mobile devices, and a ‘365’ content approach was implemented to attract and engage industry professionals more frequently with an Internet radio program, online news updates, and a digital newsletter.

One reason CONEXPO-CON/AGG has continued to evolve and grow, according to Mooney, is due to the continuing focus on an ‘industry gathering place’ model of collaboration which includes co-locations of annual conventions, key meetings, and leading groups within the international construction industry.

“CONEXPO-CON/AGG is where the industry can conduct business and achieve common goals and we welcome this industry participation,” she said.