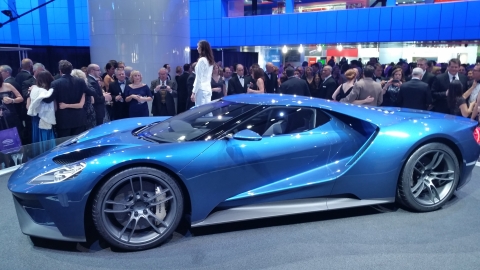 The 2015 North American International Auto Show, which wrapped up recently at Detroit’s Cobo Center and drew more than 800,000 attendees, is just the first big show of many that are headed to the city this year.

“For two weeks, we’ve seen the confidence and felt the commitment that auto manufacturers have placed in our show and in our city,” said 2015 NAIAS Chairman Scott LaRiche.

He added, “They unveiled unbelievable products in dramatic fashion; they built beautiful new, interactive displays; and dozens of amazing digital screens created a sensory extravaganza. And for the last eight days, during the public show, people have smiled from ear-to-ear from the moment they arrived. Now that’s confidence.”

The show is the premiere place for auto manufacturers to show off their latest models, including out-of-this-world concept cars.

"We continue to work hard to maintain the confidence, trust and partnerships with the global automakers,” said NAIAS Executive Director Rod Alberts.

He added, “We support the promise of the original NAIAS organizing committee which, 26 years ago, said: 'you bring the cars; we'll bring the media.' I think it's safe to say, we kept our promise."

The 8-day show kicked off in spectacular fashion with more than 14,000 people dressed in tuxes and evening gowns who took part in a special charity preview.

“It’s the largest charity event in the U.S.,” said Bill Bohde, senior vice president of sales and marketing for the Detroit Metro Convention & Visitors Bureau. “It’s a fantastic way to jumpstart our year. It does wonders for our hotel community and also restaurants and entertainment.”

The attendees to the auto show also were able to take in the 4-year renovation project at the Cobo Center, which included adding more exhibit and meeting space, a new atrium and ballroom, as well as several other improvements.

“We are 99 percent complete (with the renovation),” Bohde said. “The reaction so far has been phenomenal.”

There will be plenty more people who will be checking out the center’s upgrades this year as well, especially the more than 5,000 association executives taking part in the American Society of Association Executive’s Annual Meeting in August.

Bohde said about ASAE’s annual event, “It’s known as the Super Bowl for the (meetings) industry. We’re ready to put on quite a show."

For more info on the ASAE annual meeting follow #ASAE15 and look out for registration opening here: http://www.asaeannualmeeting.org/.

The future is looking good for Detroit as well; jumping from five major groups who booked citywide conventions last year, growing to 14 major bookings this year and 16 already signed contracts for next year.