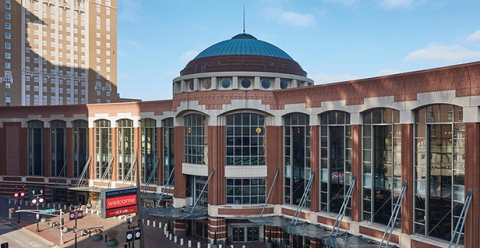 America’s Center Convention Complex in St. Louis is about to get a major makeover. On April 16, the St. Louis City Council joined the City of St. Louis’ Board of Aldermen in approving the AC Next Gen Project, an estimated $175 billion plan that will update, modernize and expand the multi-venue complex to ensure its place as an economic and employment driver for the region.

Proposed last fall, the project will include the addition of 92,000 square feet of expo space; a 65,000-sq-ft. multi-purpose ballroom and meeting area with 20,000 sq. ft of pre-function space; a new outdoor pavilion and 26 loading docks. A construction timeline for the project has yet to be determined.

The need to expand has reached an urgent level as competition increases from convention centers across the country making sizable investments to lure lucrative meetings and events to their communities, according to city officials.

“We are pleased that the community has come together to support this critical project,” said Kathleen “Kitty” Ratcliffe, president of Explore St. Louis. “At present, America’s Center’s prominence and value to the region are threatened because its amenities have not kept pace.”

In the last decade, major cities in St. Louis’ competitive landscape have either built a new facility, such as Nashville’s $623 million new Music City Center, or have made major improvements to existing venues, such San Antonio’s $325 million enhancements to the Henry B. González Convention Center, Ratcliffe added. 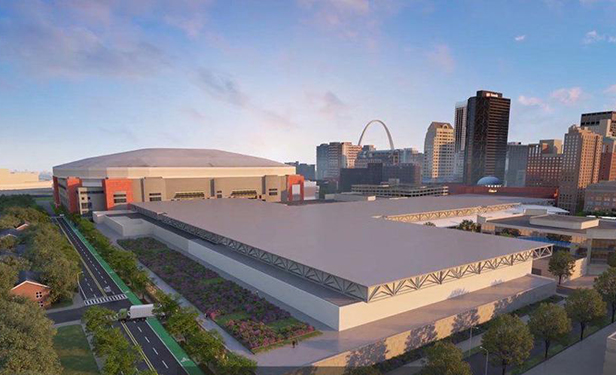 Upon completion, the enhancements are expected to stabilize the Complex’s current decline in event bookings, potentially creating nearly 36 percent growth, according to the most recent estimates by Johnson Consulting, which worked with the city to assess the need for an expansion project.

“We’ve been hearing from customers for a number of years that the America’s Center Convention Complex needs a larger ballroom, additional loading docks and more exhibit space, as many of the cities we compete with for business have been investing heavily into their facilities,” explained Anthony Paraino, director of communications for Explore St. Louis. “The AC Next Gen project will make us more competitive and help us deliver on the needs of our clients.”

ACCC hosts roughly 100 events annually with more than 600,000 attendees and 300,000 hotel room nights. This generates $265 million of new direct economic spending for the community, according to Johnson Consulting.

Through the support of legislation proposed by elected officials in St. Louis City and St. Louis County, the project will be funded completely by an extension of payments from the designated fund set up through hotel and motel taxes.

6 Convention Center Updates and Expansions to Watch In 2020
Upping their games to attract more meeting and convention business in an ever-more-competitive market, major U.S. convention centers are busy with renovation and expansion…
Bevy of Convention Centers Across U.S. Expand and Renovate
As the exhibitions industry continues to surge full speed ahead, more and more destinations are recognizing the need to upgrade, revamp and expand their convention centers in…
Boston to Sell Hynes, Expand Convention and Exhibition Center
The Boston Convention and Exhibition Center is getting ready to grow. On Sept. 19, the  Massachusetts Convention Center Authority board of directors accepted a proposal…
BIO International Convention Will Feature Expanded Innovation Zone
The Biotechnology Industry Organization (BIO), the National Science Foundation (NSF) and the National Institutes of Health (NIH) have agreed to feature Small Business…
Pennsylvania Convention Center Expands Exhibitor Rights Agreement
Facility leadership and showfloor trade partners of Pennsylvania Convention Center in Philadelphia have signed a five-year extension and amendment of its 10-year labor…
Kuala Lumpur Convention Centre Will Expand, Celebrates 10 Years
Groundwork on the purpose-built Kuala Lumpur Convention Centre’s (the Centre) expansion at the adjacent Lot 91 officially is underway as the Centre celebrates a decade in…