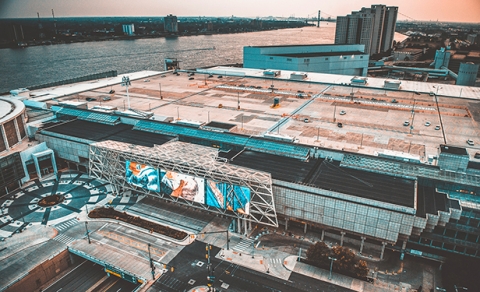 “We couldn’t be prouder or more honored to partner with the authority on this unique opportunity to support our hometown and state,” Torgow said. “It helps ensure a continued strong, vibrant future for the world-class Detroit convention center that connects our city to the world.”

He continued, “It’s an important part of our larger, intentional effort to marry inclusion with investment across the city and its neighborhoods, region and state.”

The unveiling of the facility’s new name was followed by a free block party outside of TCF Center, where local residents enjoyed games, food and Motor City-style musical entertainment.

According to TCF officials, the partnership will help TCF Center continue to grow its meetings, conventions and event business, which has experienced a record-breaking uptick since its $279 million renovation was completed in early 2016. As host to 1.5 million attendees per year, the facility had an unprecedented year in 2018 with 244 events. It’s also seen a 564 percent increase in revenue since 2009.

“This naming rights agreement has been a goal of the DRCFA since it was formed in 2009, and TCF Bank is the perfect partner,” said Alexander, who’s also CEO of the Detroit Metro CVB. “Our partnership with TCF Bank will help to cement the convention center’s strong financial future.”

The $1.5 million-per-year in sponsorship revenue from the TCF Bank partnership will also help the facility move toward becoming self-sustaining by 2024, saving Michigan taxpayers millions of dollars, according to TCF Center officials.

“It is an exciting time for the venue and city,” said Claude Molinari, general manager of TCF Center. “This naming rights contract will help develop more business for the facility, which will mean more jobs for local residents. Providing jobs is critically important to our mission.”

In addition, the combined CSR programs of TCF Bank and TCF Center will expand community outreach for the venue, and offer more free events to residents including financial management workshops, job training and financial aid access. These offerings will add to the ongoing free health and wellness events, staff volunteer efforts in the Detroit neighborhoods and support of local artists and merchants in the Pure Detroit shop located on the concourse.

“I can’t think of better partners than Gary Torgow and the team at TCF Bank to help secure the future of our region’s convention center,” Mayor Duggan said. “Today’s announcement...shows TCF Bank is truly invested in our city and its people.”

Detroit’s Cobo Center Completes $2 Million Wireless Upgrade
Detroit’s Cobo Center recently completed a $2 million technology upgrade, which included an upgraded Nortel core switch that distributes the WiFi signal and along with…
20 Steps to a Greener Event from Detroit’s COBO Center
Cobo Center has been awarded the Keep Michigan Beautiful (KMB) President’s plaque, their highest annual award. KMB was founded in 1965 by then Michigan Governor George Romney…
Detroit’s Cobo Center Completes $279 Million Transformation; Will Unveil Cobo Square in Spring
With the North American International Auto Show officially wrapping up at Detroit’s Cobo Center recently, this marks the end of a $279 million, five-year transformation at…
Chemical Bank Will Rename Detroit’s Cobo Center by End of 2019
Last month, the Detroit Regional Convention Facility Authority awarded Chemical Bank the exclusive naming rights for Cobo Center via a 22-year, $1.5 million-per-year…
Cobo Center’s Green Efforts Rewarded with Sustainable Brands Conference Moving to Detroit
The Cobo Center’s green efforts are paying off, with the Detroit-based venue snagging the Sustainable Brands conference next year, which previously was held in San Diego. “…
How Chicago’s McCormick Place and Detroit’s TCF Center Are Amplifying Green Efforts
As the importance of lessening the environmental impact of meetings, trade shows and events only continues to grow, here’s what two Midwestern convention centers are doing to…