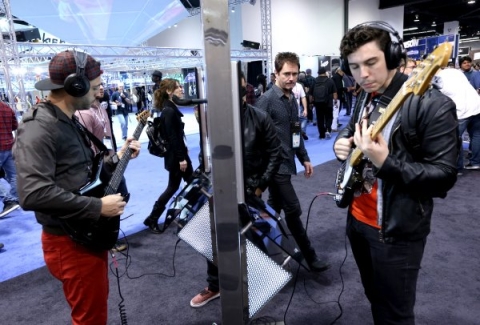 The trade show industry had a strong kick off for 2016, with shows posting big exhibitor and attendee numbers that focused on not only what the newest gourmet food trends might be, but also the latest in musical instruments and everything that someone interested in shooting and hunting might need.

The 2016 Winter Fancy Food Show, owned by the Specialty Food Association and held Jan. 17-19 at Moscone Center in San Francisco, drew 1,500 exhibitors from across the U.S. and 28 countries to exhibit space that covered 215,000 square feet, enough to fill more than four football fields with food.

Amid record sales in the $109 billion specialty food industry, the show drew close to 20,000 attendees, a 16-percent increase above 2015 numbers.

"The appetite for specialty food is stronger than ever across all sales channels. The success of our show is a clear indication," says Laura Santella-Saccone, chief marketing officer of the Specialty Food Association.

The Summer Fancy Food Show is up next – June 26-28 at the Jacob K. Javits Convention Center of New York.

Held January 21-24, the 115th National Association of Music Merchants’ Show welcomed a record number of exhibitors and registrants to the Anaheim Convention Center.

“As we look at the record number of exhibiting brands, influx of new entrepreneurial spirit and attendance from 125 countries, the industry seems poised for vital growth and breakthroughs,” said NAMM President and CEO Joe Lamond.

He added, “The NAMM Show is a reflection of our industry, not only where it is now, but even more importantly where it is heading next. NAMM members brought their A-game to Anaheim this week with creative, innovative, beautiful products.”

Held Jan. 19-22 at the Sands Expo Center in Las Vegas, the SHOT Show also attracted a record number of buyers, sending a strong signal about the health of the firearms industry.

"We are ecstatic at the response to this year's show," said Chris Dolnack, NSSF senior vice president and chief marketing officer.

This year's SHOT Show offered several new features, including SHOT Show TV, which aired in more than 70,000 hotel rooms across the city, a new NSSF Members Reception and the SHOT Show NEXT Pavilion.

"It takes an in-depth knowledge of what our industry wants and where it wants to go to pull off a show of this size and have the vast majority of those attending state, unequivocally, that this is the best show they've attended in years," said Dolnack. "That kind of positive response is the result of working hard to add value to the customer experience through new, innovative features."