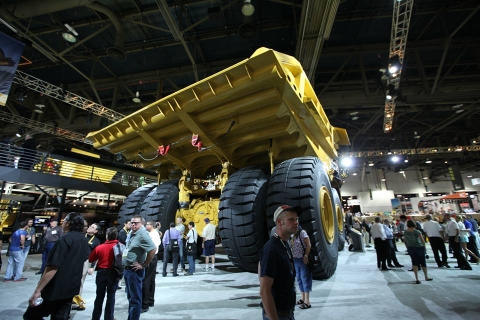 The third quarter of this year was a huge one for Global Experience Specialists, scoring $287 million in revenues, compared with $189.9 million during the same quarter the year before, a whopping 52-percent increase.

“GES delivered strong third quarter revenue growth and the team did an excellent job driving the additional revenue to the bottom line,” said Steve Moster, who leads GES and its’ parent company Viad.

He added, “In addition, we completed an important strategic acquisition in mid-August that gives us a more meaningful presence in the large U.S. audio-visual services market. The acquisition of ON Services is well-aligned with our strategy to diversify our mix of event services toward higher-margin adjacencies and to expand our reach further into corporate events as we continue to position GES as the preferred global, full-service provider of live events.”

One of the biggest shows in the U.S., the quadrennial MINExpo International, which is a GES client, was held in the third quarter in Las Vegas.

The show covered more than 840,000 net square feet, showcasing the latest mining equipment and technology from more than 1,900 exhibitors around the world.

The acquisition of ON Services also contributed revenue of $7.8 million, adjusted segment operating income of $0.5 million and adjusted segment EBITDA of $1.7 million during the 2016 third quarter, in line with prior guidance.

GES fourth quarter revenue is expected to be relatively in line with the prior year quarter as continued underlying business growth and the acquisition of ON Services help to offset the expected impact of negative show rotation of about $15 million and unfavorable currency translation of approximately $10 million.

Viad’s 3Q Revenues Increase 36 Percent; GES’ U.S. Revenues Up 39 Percent
The third quarter was a good one in more ways than one for Phoenix-based Viad, as well as its divisions, including Global Experience Specialists in the U.S. and overseas.…
GES Scores Nearly 35 Percent Q1 Revenue Jump
First quarter revenues saw a significant jump for GES of nearly 35 percent to $318 million compared with $236 million during the same period in 2016. “GES’ growth during the…
GES Scores 12.2 Percent Revenue Jump in Q2
GES’ second-quarter revenues were up 12.2 percent to $320.1 million from $285.4 million during the same period the year before. “GES delivered second-quarter results that…
OFFPRICE Scores Record-breaking Showfloor, 5.5-percent Buyer Attendance Increase
The first day of OFFPRICE, held Feb. 15-18 at the Sand Expo & Convention Center in Las Vegas, kicked off with crowds of buyers in the aisles, with some exhibitors calling…
GES Closes Out 2016 with 8-percent Revenue Uptick
GES had a good 2016, with the division of the parent company Viad closing out the year with $1,054.7 billion in revenues, compared with $976.9 million in 2015 – an 8-percent…
GES Q3 Revenues Drop 19 Percent: Driven by Negative Show Rotation
In the third quarter of 2017, GES revenues dipped 19 percent to $232 million, compared with $287 million during the same quarter the year before, primarily led by negative…